By OWW Contributor on February 3, 2015@owwcom 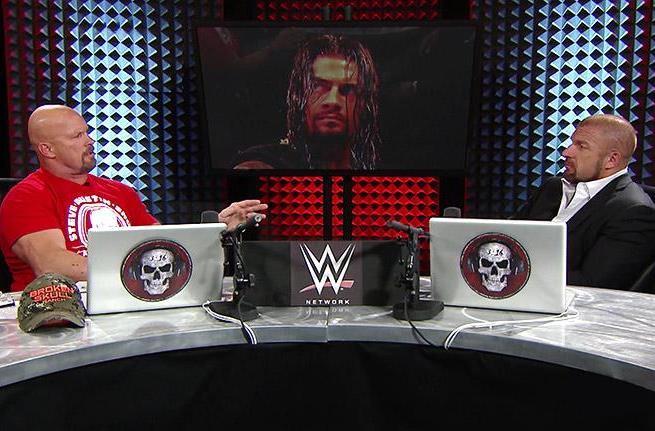 “Stone Cold” Steve Austin played The Game on the second-ever live edition of “The Steve Austin Show” on WWE Network, and the WWE Universe reaped the benefits, receiving unprecedented insight into the inner workings of WWE during The Texas Rattlesnake’s interview with WWE COO Triple H. The reunion of the Two-Man Power Trip did not disappoint in the slightest, as the WWE Hall of Famer pulled no punches with the WWE executive, and Triple H was a straight shooter. Speaking as one of WWE’s chief creative minds and not the villainous character he plays on TV, Triple H answered questions concerning his work at WWE NXT, Mr. McMahon’s infamous “Brass Ring” comments, Chyna  and, yes, the controversial ending to the 2015 Royal Rumble. See below for a sampling of questions, and be sure to watch the full replay on WWE Network, which is free in February for new subscribers.

AUSTIN: “When you were 5 years old, you fell in love with the business and then it just became your passion. … You’re going to leave behind a legacy that anybody would be proud to claim. … You ended up marrying Stephanie McMahon, but that was just by chance. … What was your exit strategy from the business?”

TRIPLE H: “If none of the Steph stuff happened and I didn’t meet her and — people bring this up a lot as a criticism of me or a knock on me and that, at first, bothered me. This is a tough business, and when you get that [knock], it’s like everything you’ve ever done is negated. … I got past that, but that criticism being there, I think that if I’d never met her, I’d have probably ended up in this same place. Not exactly the same place, but I’d still be here. I’d still be behind the scenes and I’d still be doing this work.”

“STONE COLD” STEVE AUSTIN: “If you could change anything you wanted about Monday Night Raw, what would you change?”

TRIPLE H: “I’d love it to be two hours. A third hour of television is so exponentially harder to [produce]. I can’t even begni to describe it to you. … I would like to see the women get more time and more dedication. They have a lot to offer, and we have a large fan base of women that watch and I think they’re inspirational. I think just them having that time and the stories and all of that [would be great].”

Read of the interview more here!