Home / Columns / Where Have All The Characters Gone?

Where Have All The Characters Gone?

By OWW Contributor on September 8, 2016@owwcom 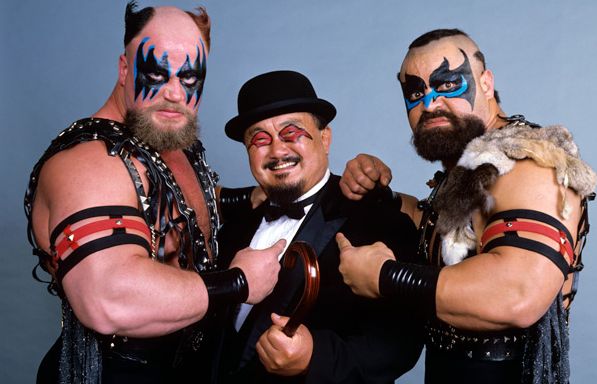 Corrigan’s Corner: Where Have All The Characters Gone?

On August 28, 2016, the wrestling world lost one of its most famous villains: Mr. Fuji.

The martial arts master toured the country throughout the 1960s and 70s, accumulating several titles before dominating the WWE tag team division with fellow foreign menaces Prof. Toru Tanaka and Mr. Saito. Then he ditched his tights for a tuxedo and bowler hat ala Oddjob from James Bond and became a manager in the WWE, guiding Don Muraco, Demolition, the Powers of Pain, and Yokozuna, among others.

Tossing salt in foes’ eyes and jabbing their ribs with his cane, the Devious One will be remembered as a good wrestler, prolific manager and above all, beloved character.

If Fuji debuted in today’s hypersensitive, P.C. world, WWE would be flooded with a tsunami of grievances not seen since Aflac dropped Gilbert Gottfried. He was, after all, a Japanese stereotype. But back in the Rock N Wrestling Era, nobody cared about offending minorities because folks had thick skin and common sense. WWE characters were cartoonish and plentiful, and most importantly, fun.

Bobby Heenan was a weasely used car salesman hellbent on dethroning Hulk Hogan for the world championship. Hillbilly Jim was a rootin-tootin country bumpkin looking to have a good time. Rick Rude was on top of your wife.

Creating characters was WWE’s specialty. Nowadays, not so much.

Vince McMahon’s pet project, the supposed future main star of the company, has no character. What do we really know about Roman Reigns? He hails from the Samoan wrestling dynasty, he was friends with Dean Ambrose and Seth Rollins, and he’s strong. We can ascertain that Reigns gained his strength from PEDs because that’s the only information about him we’ve learned this year.

Aside from Paul Heyman establishing a background (“the baddest Samoan from the baddest family”) for him in the buildup to WrestleMania 31, WWE has failed to educate us on why we should cheer the supposed hero of the weekly story. And he’s not the only missing character.

Who is Apollo Crews? What makes Alberto Del Rio so despicable? If Baron Corbin eats with everyone else in catering, how is he the “Lone Wolf?”

We boo Titus O’Neil because he beats up 67-year-old Bob Backlund, but what the hell is Backlund doing there, anyway? Why does he want to make Darren Young great again? Is Young paying him as a coach? Does Bob consider this a P.R. stunt to ease his conservative image with the gays?

The most puzzling issue lies with the Shining Stars. This past RAW they said unlike in America where Labor Day marks the end of summer, it’s always warm in Puerto Rico. That’s it—that was the catalyst for us to hate them. Because they don’t have to wear ear muffs for three months out of the year, we hope Enzo & Cass kick their tanned asses!

It’s not just a lack of identities that WWE struggles with, it’s identity crises. In one segment, Stephanie McMahon is the evil heiress imposing her authority on fan favorites such as Daniel Bryan and Dolph Ziggler. Then we go to commercial where she’s crying about Connor The Crusher and imploring fans to donate to charity. Back from break, and she’s championing the Divas’ Revolution because she’s a feminist icon but holy shit, she’s married to the Cerebral Assassin, who was cheered as the corporate prick against hated hero Reigns, and then screwed another miscast villain, Seth Rollins, out of the title picture.

All of this schizophrenia has me longing for the simplicity of NXT, run by progressive visionary and equal opportunist Triple H.

Sometime after the Attitude Era, WWE stopped producing characters and transitioned into realism. Rather than the old standard good vs. evil, WWE added shades of gray into their storylines. Everyone wants to win the world title. Every rivalry is about being the better man/woman. Everyone’s ultimate goal is to achieve enough WrestleMania moments that they’ll be inducted into the WWE Hall of Fame.

Pro wrestling became sports entertainment, but where exactly is the entertainment? Gallows and Anderson mocking The Old Day is certainly no Fuji Vice. WWE Superstars now lack personality traits for fans to identify and either agree with or despise. Character motivations have been traded for forced nicknames: The Big Dog, Viperville, Lunatic Fringe, etc.

When WWE does create characters, their momentum fizzles out due to lazy booking and rapid disinterest. The Vaudevillains, Fandango, Bo Dallas’ undefeated streak, Kizarny, Mordecai. None of the above has been hindered as badly as Bray Wyatt, the most original and riveting WWE character since the Attitude Era. His cult leader aura and genuinely scary demeanor harkens back to the Undertaker’s Ministry of Darkness days, yet Wyatt’s credibility has collapsed from consecutive major feud losses that no one cares about his once spellbinding spiels.

It’s not an industry-wide epidemic, either. TNA has revitalized its brand with “Broken” Matt Hardy, The Decay, EC3, and other easy-to-define characters. Ring of Honor, once deemed a hardcore fan’s oasis for pure technical wrestling but a casual fan’s snoozefest, has ushered in a wave of captivating characters such as Dalton Castle, Silas Young and The Young Bucks. Lucha Underground has revolutionized the entire genre by portraying wrasslin’ as a TV series, introducing and developing multi-dimensional characters with layered storylines.

It’s the indy scene, however, where you’ll find characters similar to the Rock N Wrestling Era. “Bad Apple” Matt Macintosh. “The Product” David Starr. The Jewish heavyweight Champion of the World Elia Baratz. Just a couple weeks ago at CTW Charity Wrestling’s “Fight Cystic Fibrosis 2016” you could find a cavalcade of wacky characters in the Dick Justice Battle for Justice.