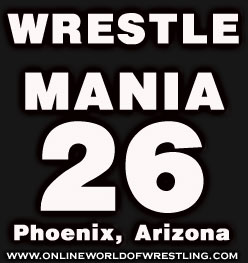 Here we go ladies and gentlemen, we are one day away from the year’s biggest pro-wrestling event, the spectacle that is WrestleMania.  For anyone who cares, here are my predictions for the 26th edition on PPV.

Rey Mysterio vs. C.M. Punk w/Straight Edge Society (Luke Gallows & Serena): This contest has the makings of a classic, but it also has the potential to stink if the wrong agent gets his hands on it.  I have a bad feeling the Straight Edge followers will get involved, and we’ll see young Dominick (Rey’s son) come in to help his dad.  I cringe at the thought of watching Luke & Serena bump for that little kid (who is bigger than Rey).  I am going to say common sense prevails here, and Rey Mysterio wins clean, because I don’t really want to see the storyline unfold where he has to do all the Straight Edge Society stuff.  What ever happened to the first two guys who joined the S.E.S.?  Usually they get their head shaved, does that mean Rey has to unmask?  Nobody wants to see that either.

The 6th Annual Money in the Bank Ladder Match featuring Christian vs. Shelton Benjamin vs. Matt Hardy vs. Dolph Ziggler vs. Kane vs. Evan Bourne vs. Montel Vontavious Porter vs. Jack Swagger vs. Drew McIntyre vs. Kofi Kingston:  This is perhaps the hardest match to predict, because of the noticeable lack of star power.  With the exception of Kane, most of the participants are on the cusp of stardom, but haven’t quite reached it for whatever reason.   Shelton Benjamin and Matt Hardy have proven to be career mid-carders.  For that reason, I think Kane is the smart choice here, but I am expecting a twist this year.  Since the WWE are planning an entire PPV dedicated to the Money in the Bank in July (replacing Night of Champions), I feel it is important for whoever wins this match to cash it in quickly.  This person would have to be a heel looking for every shortcut possible to the championship.  This person must be spoiled, arrogant, and confident.  That narrows it down to Jack Swagger, Dolph Ziggler, and Drew McIntyre.  Since McIntyre is the only one of those three getting a good push right now, I will pick him to be this years Mr. Money in the Bank.  I am going to go out on a limb and say Mr. McIntyre will cash in his title shot the same night he earned it, going after the winner of Edge vs. Jericho – but losing in humiliating fashion.  So the MITB would prove to be insignificant this year, which would pave the way for another Money in the Bank  in July at the PPV named after the match.

Triple Threat Match – Randy Orton vs. Ted DiBiase Jr. vs. Cody Rhodes: I am going to pick Randy Orton, just because he is the huge star right now.   I am envisioning a unique double-turn scenario, where Rhodes turns on DiBiase and helps Orton win.  That way DiBiase would become the babyface and Orton/Rhodes would go back to being heel.  I don’t think the WWE Universe is mentally ready to cheer for Orton.  I’ll stick with Orton, final answer.

“King of Kings” Triple H vs. “The Celtic Warrior” Sheamus: Triple H wants to help his workout buddy, Sheamus, get over with the WWE Universe, but I don’t think laying down for him at a WrestleMania is the right way to do it.  Triple H will make Sheamus look like a million bucks, before putting him away with a Pedigree.  Where does Sheamus go from here?

Unified Tag Team Titles – The Big Show & The Miz vs. John Morrison & R-Truth: This is the least interesting match on the card.  I’d rather see the Miz vs. Daniel Bryan personally.  I don’t see R-Truth & Morrison being the team that jumps around both shows defending against all comers, so for that reason I am picking Miz & Big Show to win.  Some new challengers to the tag team titles are going to have to develop after WrestleMania.

Street Fight – Vince McMahon vs. Bret “The Hitman” Hart: I had an amazing revelation yesterday, where I came up with an idea to involve the Hart family.  Everyone knows that Bruce Hart has always been bitter about never getting a job in the WWE.  What if the entire Hart family was at ringside, and thwarted all of Vince’s attempts to cheat, including an appearance by Shane.  Suddenly Bruce jumps in and turns on Bret, helping Vince gain victory – in exchange for a WWE contract.  Vince did say, “one way or another, you are screwed!”  That would be cool, except for the fact that Bruce is too old, so it wouldn’t work.  But admit it, that would be pretty darn great.  Okay, so Bret Hart is going to win, probably with a knockout punch and a Sharpshooter.  I would like to see the Hart Dynasty trio get involved somehow, leading to a much bigger push in the post-Mania storylines.

Streak vs. Career – The Undertaker vs. Shawn Michaels:  The Undertaker and Shawn Michaels will put on an amazing performance, but probably not surpass last year’s effort.  Nobody expected last year’s match to be as good as it was, but this year the expectations are there, so it won’t be the same.  Shawn Michaels has wanted to retire for a while, so I’m guessing this will be his farewell, because I feel ending the streak would be the dumbest move ever.  I hope they do a Flair-like tribute for Michaels on RAW the next night. 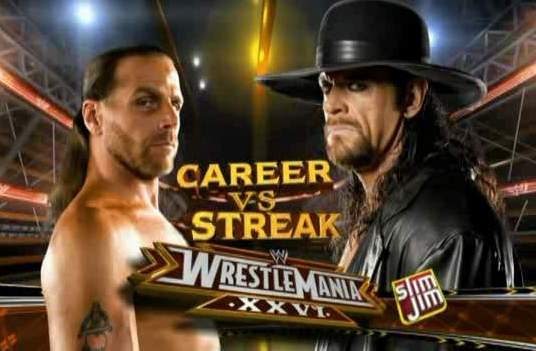 World Heavyweight Title – Chris Jericho vs. Edge:  The match has been built around the Spear being the key to victory.  Here’s the thing.  If you get bit by a snake once, you’re screwed, but if you get bit multiple times, you begin to build an immunity to it (assuming you survive the first bite).  This past week on SmackDown!, Jericho successfully avoided the Spear.  Edge has foolishly taught Jericho how to not get Speared.  Way to go, Edge.  I think the majority of the match will be spent with Edge going for the Spear, but Jericho dodging it.  Edge will have to pull out something new to throw Jericho off his game long enough to hit a different kind of Spear and win.  Something worthy of a highlight reel.  Edge will capture the World Heavyweight title, but his night will not be over.  Money in the Bank winner Drew McIntyre will come out and challenge the exhausted Edge, thinking he could outsmart the “ultimate opportunist.”   McIntyre would last about two minutes before Edge hits another Spear for the win to retain his championship!

WWE Championship – Batista vs. John Cena:  I really wish the WWE championship wasn’t apart of this match.  It really has no significance in this storyline.  The feud could easily stand alone at this point.  John Cena is the poster-child of the WWE, so I expect him to win yet another championship at WrestleMania and probably piss off all the Cena-haters.  I say when they are ready to turn Orton babyface, I expect that will be the time to turn Cena heel.