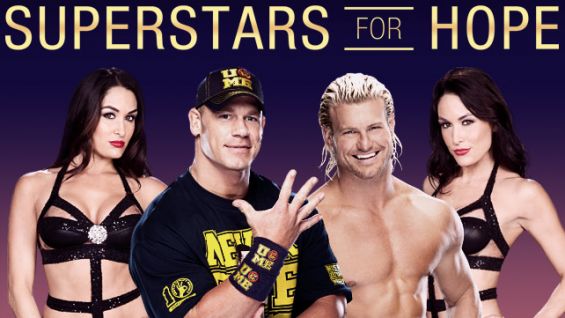 WWE announced the launch of Superstars for Hope, a fundraising campaign on Indiegogo, the world’s largest crowdfunding platform, to benefit Special Olympics and Lucile Packard Children’s Hospital Stanford in honor of Connor’s Cure. The announcement was made exclusively on Twitter by WWE Chief Brand Officer Stephanie McMahon, WWE Hall of Famer Hulk Hogan and WWE Superstar John Cena. To kick off Superstars for Hope, WWE and the San Francisco 49ers Foundation have each donated $25,000, the first in a series of community outreach initiatives in celebration of WrestleMania 31 at Levi’s Stadium in Santa Clara on Sunday, March 29.

Beginning today, supporters can donate at SuperstarsforHope.com and receive unique WWE merchandise, autographs, and once-in-a-lifetime experiences from WWE Superstars, Divas and Legends. Each week, WWE will add new exclusive experiences to the campaign, including:

“WWE’s support of Special Olympics gives us a unique platform from which to reach, educate and welcome countless new fans and athletes to our movement,” said Janet Froetscher, CEO, Special Olympics. “The important work we do around the world to create communities of acceptance and respect for all will only be successful when the world heeds our call to Play Unified in order to Live Unified.”

“Every day at Lucile Packard Children’s Hospital Stanford, our doctors, staff, and researchers strive to ensure the best possible care for children with cancer,” said Christopher G. Dawes, president and CEO of Lucile Packard Children’s Hospital Stanford. “WWE has been a strong advocate of pediatric cancer research and we’re pleased to support the important mission of Connor’s Cure.”

“WWE is dedicated to using the power of our brand to give back to the community in as many ways as we can,” said Stephanie McMahon, WWE Chief Brand Officer. “I am proud that this year’s Superstars for Hope campaign will support two worthwhile causes, Special Olympics celebrating acceptance and inclusion, and Lucile Packard Children’s Hospital Stanford in honor of Connor’s Cure in an effort to find a cure for pediatric cancer.”

“The 49ers Foundation is proud to be partnering with WWE to further our commitment to making an impact on and off the field,” said John York, Chairman/Co-Owner of the San Francisco 49ers. “Special Olympics and Lucile Packard Children’s Hospital Stanford provide much needed resources for superstars in our community – athletes with intellectual disabilities and children fighting life-threatening and life-limiting illness. It is an honor to join with WWE to support them through the Superstars for Hope campaign.”

Fans can click here now through Tuesday, March 31 to participate and use the hashtag #STARS4HOPE when donating.

Indiegogo empowers people around the world to fund what matters to them. As the largest global crowdfunding platform, campaigns have launched from almost every country around the world with millions of dollars being distributed every week due to contributions made by the Indiegogo community. Indiegogo is the equal opportunity platform dedicated to democratizing the way people raise funds for any project – creative, entrepreneurial or cause-related. The company was launched in 2008 and is headquartered in San Francisco, with offices in Los Angeles and New York.  For more information, visit www.indiegogo.com and follow us at www.twitter.com/indiegogo and www.facebook.com/indiegogo.