By OWW Contributor on September 3, 2014@owwcom 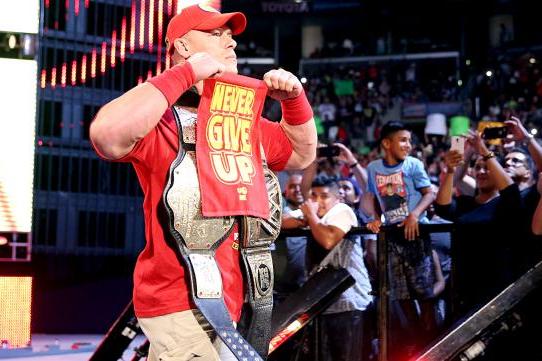 By Sharon Glencross , featured columnist for the Bleacher Report:
Photo courtesy of WWE.

Heading into Night of Champions, WWE bookers need to take some steps to improve John Cena‘s current character if they want his rematch with Brock Lesnar to have appeal and intrigue.

Granted, Vince McMahon and his team of writers have a tough task ahead of them anyway—Lesnar absolutely destroyed Cena at SummerSlam, and it will be difficult to convince fans that Cena has a legitimate shot the second time around. But they haven’t helped themselves with their muddled booking of the former WWE champion’s character in recent weeks.

As noted, Cena was obliterated by Lesnar in Los Angeles. Ideally, this devastating loss would have led to a drastic revamp of his character; he would become depressed and disillusioned and start seriously questioning the state of his career.

But that hasn’t happened. Sans a few remarks, Cena hasn’t really sold it emotionally. Nor did he sell the beating he received, either; he was back in the ring soon after SummerSlam looking better than ever. In general, he seems to be fine.

He even (hilariously) threatened Triple H with a lawsuit on Monday’s edition of Raw if Triple H withheld his title shot at Night of Champions from him.