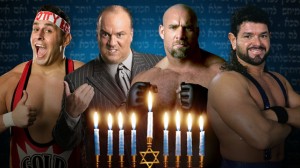 In the spirit of Hanukkah, this article is courtesy of WWE.com:

Through the course of 5,773 years, the Jewish people have developed the theory of relativity, come up with the polio vaccine, sat on the Supreme Court and served as the current mayors of both Chicago and New York City. But did you know at least one Jewish person has won the World Heavyweight Championship?

Perhaps the most well-known Jewish wrestler was William Goldberg. The former defensive tackle for the Atlanta Falcons burst into WCW in late 1997 and became a phenomenon. The 6-foot-4, 285-pound monster refused to change his given name. He didn’t even go by “Goldberg the Great” or “The Terrifying Goldberg.” He was simply “Goldberg.”

But as common a name as that is in Jewish communities around the world, Goldberg was a tremendously uncommon athlete. He compiled the most impressive undefeated streak in the history of sports-entertainment en route to defeating Hollywood Hogan for the WCW World Heavyweight Championship in front of more than 40,000 screaming fans at Atlanta’s Georgia Dome. Goldberg let his actions do the talking and became the most successful Jewish wrestler of all time.