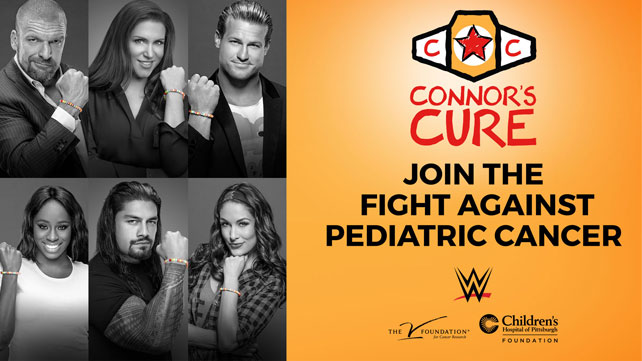 In an effort to help find a cure for pediatric cancer, WWE (NYSE: WWE) today announced the first-ever “Get the Gear, Give the Gear” campaign, where fans, beginning Monday, September 5 through the end of the month, can purchase bracelets and bandanas with 100 percent of net proceeds benefiting Connor’s Cure, to support pediatric cancer research.

WWE will utilize its global assets including WWE Network and TV broadcasts, live events, PSAs, digital and social media to generate awareness and encourage fans to get involved. Throughout the month, the WWE announcer table, entrance ramp, ring skirts and ring posts will go gold to promote the fight against pediatric cancer. Additionally, WWE Superstars will visit pediatric cancer patients at hospitals across the country.

“WWE is extremely proud to expand our support of Connor’s Cure around Pediatric Cancer Awareness Month,” said Stephanie McMahon, WWE Chief Brand Officer. “The continued effort to raise awareness and funds in the fight against pediatric cancer is important to help find a cure for this devastating disease. We are grateful to the WWE Superstars, fans, The V Foundation and Children’s Hospital of Pittsburgh for their continued support.”

“The V Foundation is excited to recognize Pediatric Cancer Awareness Month with such a fantastic and motivated partner,” said Susan Braun, CEO of The V Foundation. “We are both driven to end this disease, and working as a team to meet that goal means success can come more quickly.”

All funds raised through Connor’s Cure will be distributed through the V Foundation’s grant making process. In addition, WWE will donate a Connor’s Cure bracelet or bandana to a child battling pediatric cancer for every item purchased. Fans will also be able to give a donation during checkout on WWEShop.com and can use the Connor’s Cure bracelet filter on their Facebook and Twitter profiles to show their support.

Earlier this year, WWE and The V Foundation announced a multi-year partnership to support pediatric cancer research nationally through funds raised by Connor’s Cure. In 2014, Connor’s Cure was created by Stephanie McMahon and her husband, Paul “Triple H” Levesque, to support pediatric brain and spinal cord cancer research. Connor’s Cure was established in honor of 8-year-old WWE fan Connor Michalek, a patient at Children’s Hospital of Pittsburgh of UPMC who battled medulloblastoma, a rare tumor that affects the brain and spinal cord. To date, Connor’s Cure has raised more than $1 million and assisted more than 100 families around the world.

About The V Foundation for Cancer Research:

The V Foundation for Cancer Research was founded in 1993 by ESPN and the late Jim Valvano, legendary North Carolina State basketball coach and ESPN commentator. Since 1993, The Foundation has funded more than $150 million in cancer research grants nationwide. It awards 100 percent of all direct cash donations to cancer research and related programs. Due to generous donors, the Foundation has an endowment that covers administrative expenses. The Foundation awards peer-reviewed grants through a competitive awards process vetted by a Scientific Advisory Committee. For more information on The V Foundation or to make a donation, please visit www.jimmyv.org.

WWE, a publicly traded company (NYSE: WWE), is an integrated media organization and recognized leader in global entertainment. The company consists of a portfolio of businesses that create and deliver original content 52 weeks a year to a global audience. WWE is committed to family friendly entertainment on its television programming, pay-per-view, digital media and publishing platforms. WWE programming reaches more than 650 million homes worldwide in 25 languages. WWE Network, the first-ever 24/7 over-the-top premium network that includes all live pay-per-views, scheduled programming and a massive video-on-demand library, is currently available in more than 180 countries. The company is headquartered in Stamford, Conn., with offices in New York, Los Angeles, London, Mexico City, Mumbai, Shanghai, Singapore, Dubai, Munich and Tokyo.