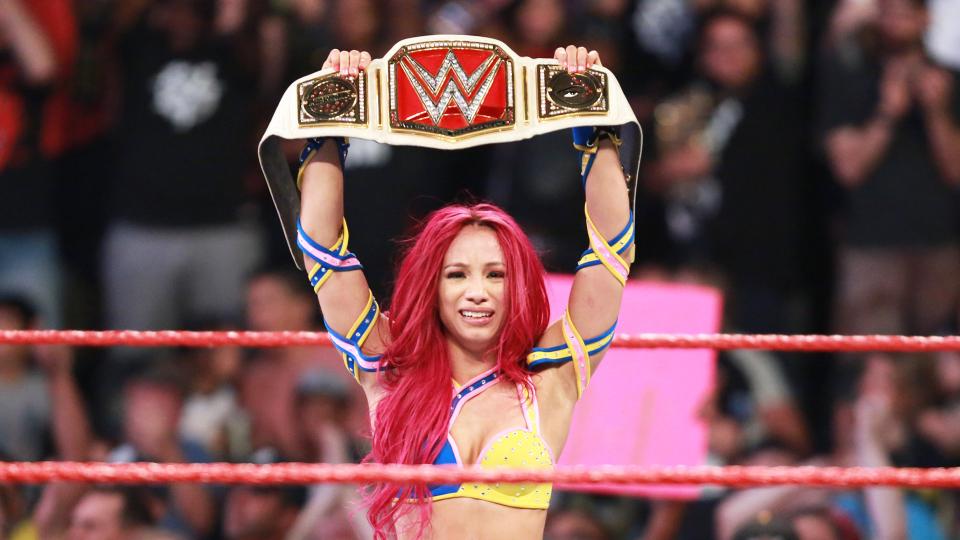 This past week on WWE Monday Night RAW, Sasha Banks challenged current champion Charlotte for the WWE women’s championship.  Here is a full recap of this historic match!

JoJo does the introductions in the ring to give this a big fight feel. The crowd is definitely buzzing over this upcoming match-up.

The bell rings, and they circle the ring before locking up. They tussle for position before locking back up. Sasha takes her down and tries to pin her shoulder to no avail. Charlotte shoves her to the corner and goes for a clothesline, but Sasha rolls her up for a no count. Charlotte goes for a takedown, but Sasha blocks it and executes a backslide pin for a one count. Charlotte sends her into the ropes, but she eats an elbow. Dana Brooke grabs Sasha’s foot in full view of the referee, and Charlotte takes Sasha down. The referee yells at Dana. Charlotte goes for a body slam, but Sasha lands on her feet and applies a straightjacket with some extreme bending. Charlotte gets to her feet and backs her to the corner before whipping her off. Sasha takes her down and goes for the Bank Statement, but Charlotte gets out of the ring. Sasha gives her a vicious baseball slide before doing the double knee off the apron! Sasha gets her in the ring for a near fall.

Sasha blocks a boot and tries to lay her against the ropes, but Charlotte gets out and boots her back. Charlotte connects with a hangman’s neckbreaker. Sasha boots her back and goes to the apron, but Charlotte knocks her off the apron. Charlotte yells at the crowd before going outside and booting Sasha into the barricade! Sasha’s head and upper back bounces off the barricade. Charlotte grabs her WWE Women’s Championship and says Sasha doesn’t deserve it. Sasha drives her into the apron, but Charlotte shoves her off. Sasha tosses the Women’s Championship at Dana and drops down. The referee sees Dana holding the belt and ejects her from ringside. Sasha smiles as Eddie Guerrero’s old trick worked to perfection.

We come back from the break to see Charlotte applying a surfboard stretch. Sasha fights out and hits a head-scissor takeover before dropping her into the ropes. Charlotte elbows her back and sends her into the ropes, but Sasha takes her down with double knees to the face.

The referee is counting them both down, but they each answer the count. They trade forearms before Charlotte knees her in the midsection. Sasha avoids a big boot and connects with a pair of clotheslines and a dropkick. Sasha blocks a kick and knees her in the face. Sasha blocks a boot in the corner and lays her against the ropes for a double knee to the midsection for a two count. The crowd is really getting into this match. Charlotte drops her into the turnbuckle and goes for a suplex, but Sasha lands on her feet. Charlotte quickly twists into a neckbreaker. Charlotte smiles as she steps on Sasha. Charlotte goes to the top rope for a moonsault, but she lands on her feet when Sasha moves. Charlotte goes for a summersault senton splash, but Sasha gets her knees up. Charlotte rolls out of the ring to recover. Sasha connects with a suicide dive and lands in a truly scary moment much like Lita did in the match against Trish Stratus from 2004. That looked awful. Luckily Sasha is quickly to her feet not feeling the effects and gets Charlotte in the ring for a near fall. Unbelievable.

Sasha looks physically and mentally exhausted. Charlotte sneers at her and says Sasha will never beat her. Charlotte charges at her, but Sasha counters into the Bank Statement in the center of the ring! Charlotte has no choice but to tap out!

Mike Chioda hands Sasha Banks the WWE Women’s Championship, and she stares at it in disbelief before beginning to break down. Charlotte looks disgusted.