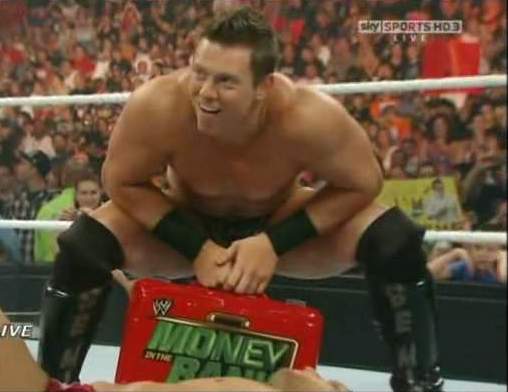 This coming Monday is the Slammy Awards for WWE. The Wrestler of the Year will determined by fan voting, which means it will be John Cena or Randy Orton. Why even bother voting? This is similar to the real election. There are only two parties that even have a chance to win and Rey Mysterio might as well be the Green party.

However, the rest of the night, everything is up for grabs. So let’s take a look at those awards.

The Miz cashes in Money in the Bank and becomes WWE Champion
John Cena is forced to joined The Nexus
The Nexus takes out Mr. McMahon

Paul Bearer turns on The Undertaker

The Miz winning was not shocking. It was hinted throughout the show and I didn’t care when it happened. It was by far the worst cash in since the Money in the Bank idea was started. John Cena forced to join Nexus was not shocking either, considering the WWE gave away the results before the match by playing the WWE Survivor Series promo that featured Nexus. Whomever thought Cena being forced to join Nexus was shocking, they are just foolish.

Santino Marella should not receive any awards. Other than that, all three are decent choices.

Verdict: Michelle McCool and Layla (note: I refuse to call them the other name) gets beaten by Mae Young.

If the award was “Most Overrated Segment” Award, then CM Punk singing would wins hands down. Kane had to bury the Undertaker alive to win a match since it was a Buried Alive match. So that is not necessarily despicable.

In the WWE Universe, these are definitely “holy %&^*” award worthy. In all of pro wrestling, some of these would not even make the ballot.

All of these guest hosts segments are terrible.

Verdict: Florence Henderson kisses The Great Khali. Simply because this was the most tolerable watching.

All of these are great nominees.

Verdict: Batista quits WWE. It should be noted that I do not miss him whatsoever.

——————-
If the award was “Worst Moment of the Year” it would definitely go to Hart and Michaels shaking hands. I lost a childhood hero that day and it was all downhill from there for Hart, but that’s another article for another day. It’s really close between Nexus debuting and Undertaker vs HBK.

Verdict: Nexus debuts and attacks John Cena. Let’s face it, this moment was one of the only interesting things that happened in WWE this year. I also believe this will be WWE’s way out of not having to bring Undertaker back and Shawn Michaels not appearing. Since that match would undoubtedly win match of the year, they put in this category, where it will lose.