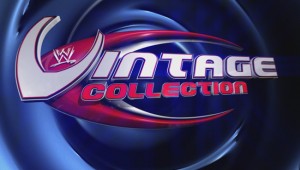 WWE Women’s Championship bouts were featured on this week’s episode of WWE Vintage Collection.  Matches airing on the show were: