Over 700 Signs Posted in Texas to Promote WrestleMania 32 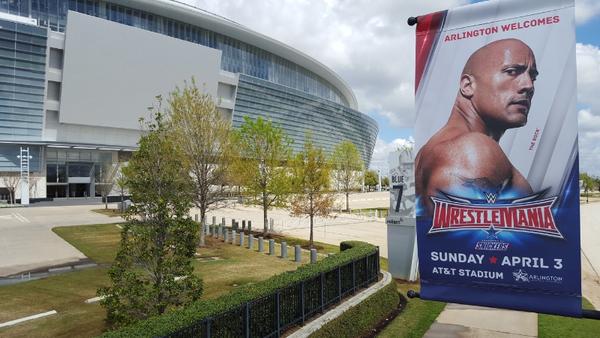 Creative and visual communications agency the Bubble™ announces its latest major project surrounding the anticipated WrestleMania 32 of World Wrestling Entertainment (WWE) that will be held at AT&T Stadium in Arlington, TX on April 3, 2016.

The project is part of the Arlington Convention and Visitors Bureau’s Banner Program located within the Arlington Entertainment District (surrounding AT&T Stadium, Globe Life Park, Six Flags Over Texas, Hurricane Harbor, Arlington Convention Center, Lincoln Square and more) in partnership with the Dallas Sports Commission, an entity that provides event organizers of amateur, collegiate, Olympic or professional sporting events or meetings with the necessary steps in planning such events in the DFW area.

Managed by the Bubble™, from overall project management and creative to printing and installation, the Arlington CVB’s Banner Program provides over 700 street pole signage opportunities in and around the major attractions in the Entertainment District. “Our banner program is tailored to maximize event exposure while allowing for specific decorative, marketing and promotion goals,” states Decima Cooper Mullen of Arlington CVB. “A campaign within the Arlington Entertainment District isn’t just on a local level, it’s on a national and international stage. We work closely with the Bubble with each aspect of the process, and the superb job they do is the reason our relationship has been long-standing.”

Based on TXDOT traffic counts in the Arlington Entertainment District, the program managed by the Bubble™ promoting WrestleMania 32 is expected to reach over 9.1 million impressions with a flight between March 16 to April 6, 2016.

WrestleMania 32 will feature the championship clash on the grandest stage of them all as WWE World Heavyweight Champion Triple H will battle challenger Roman Reigns at WrestleMania, April 3 at AT&T Stadium in Arlington, TX.