Inside the Ring (The Basics) with Doug Basham 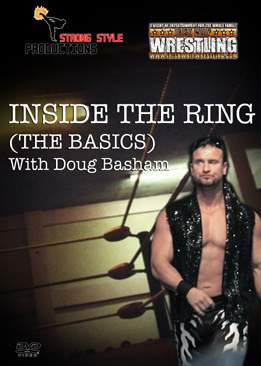 www.STRONGSTYLEPRODUCTIONS.com
* * * Irish Whip Wrestling * * *
Inside The Ring (The Basics)
with Doug Basham
Reviewed by Brad Dykens

You might remember the Strong Style Productions team from their three-release DVD series about Allison Danger, including Straight Shootin’, Fight Hard, and The Lost Clips. Those DVD’s were excellent, and they followed up with a similar DVD involving Doug Basham called Wrestling Memoirs. Now they are following up again with a second DVD featuring Doug Basham, but taking it in a completely different direction.

Doug Basham has been around the wrestling business for 17 years and has become a top talent, but unfortunately that skill has not always translated into the employment that he deserves. Basham’s passion keeps him going, wrestling all over the world for promotions like OVW, WWE, TNA, and various other independents. That makes him the perfect candidate to give back and teach the new generation the right way to get into the professional ranks of wrestling.

The DVD is actually a training tool, featuring clips of Doug Basham as he leads a seminar of 20 young wannabe pro-wrestlers. He starts off by giving a speech about his experiences in wrestling, and what it takes to make it in the business. Soon the session gets physical, but it might be more accurately described as “comical,” as Basham lets each trainee perform an entry into the ring by sling-shooting themselves over the top rope (something Basham claims was the first thing he learned 17 years ago). I swear you could have put circus music on in the background, because 75% of the guys tripped, stumbled, or flat out crashed and burned when doing the move for the first time. You have to give them credit for trying, and it was apparent that it isn’t as easy as it looks. I would put some of the blame on the ridiculously loose ropes on the Irish Whip Wrestling ring.

Specific items covered during the seminar are; entering the ring, running the ropes, the back bump, turnbuckle bump, and how to work. Sometimes it gets a little bit monotonous, but other times it is downright hilarious. Basham kept it fun for everyone involved, but definitely made sure everyone knew how serious he was about his craft. By the way, I wouldn’t expect to see any future WrestleMania main eventers in this crop of trainees, but you can sense the passion within the group. There is a bonus item on the DVD of a Question & Answer session that took place after the seminar as Basham takes questions from the trainees while gathered comfortably in the ring where he “thinks best.”

Inside the Ring (The Basics) gives you a fly-on-the-wall view of a training seminar by former 2x WWE tag team champion. For more information, and to find out how you can order “Inside the Ring (the Basics)” check out www.strongstyleproductions.com and www.irishwhipwrestling.com