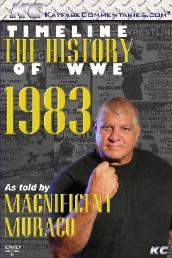 Previous editions of the Kayfabe Commentaries “Timeline” series focused on 1987 (Honky Tonk Man) and 2000 (Rikishi). I could probably declare that those were my most favorite and least favorite years in WWE history. For the third installment, KC director Sean Oliver threw a dart and hit the year 1983, the eve of the dreaded WWF expansion. They enlisted the services of “Magnificent” Don Muraco, to help tell the story from January to December – from his point of view.

The Magnificent One was a major player on the Northeast circuit in 1983, a year which saw the tail end of the Bob Backlund era and gave birth to the Hulkamania era in its final days. Don Muraco engaged in classic feuds with then World champion, Bob Backlund, and Rocky Johnson, before lining up for his memorable war with Jimmy “Superfly” Snuka. Muraco was arguably the top heel in the territory that was on the verge of exploding.

Muraco’s Hawaiian charm prevents him from slinging any mud, but he openly discusses all the ins and outs of what was going on in the World Wrestling Federation as it prepared to take over the wrestling world. Muraco’s didn’t pay much attention to the office, so there wasn’t much dirt to be exposed in that respect, but he did have a lot to say about the incredible matches that the WWF produced during that time. Muraco did openly discuss Jimmy Snuka’s personal problems, as well as Eddie Gilbert’s car accident. There is even a story about Iron Mike Sharpe and his famous bout with obsessive compulsive disorder. These Timeline DVD’s are great for the old school wrestling fan who misses the old days and wishes there was some way to relive them.

If you’re not a fan of Kayfabe Commentaries, then become one now and head over to their website at www.KayfabeCommentaries.com and pick out a couple of amazing DVD’s from their growing collection. You won’t regret it.