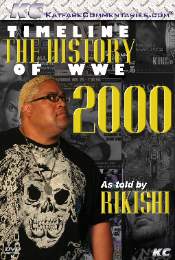 Online World of Wrestling DVD Review
Timeline – History of the WWE 2000
As told by RIKISHI
Available at www.KayfabeCommentaries.com
Reviewed By: Brad Dykens

The first edition of the Kayfabe Commentaries “Timeline” series focused on 1987, which happens to be my favorite year in the history of the WWE. The year 2000, however, is probably my least favorite year since I started watching Vince McMahon’s product on TV in the early eighties. KC director Sean Oliver enlisted the services of Rikishi to help run down the highlights of the year.

It turned out to be more of a run down of Rikishi highlights from the year 2000. He was a big part of the year for WWE, but I feel like he rates himself a bit higher than he actually was in reality. I will give him credit for at least two very memorable moments, including his Superfly Splash off the steel cage onto Val Venis at Fully Loaded, and his backwards fall from the top of the Hell in a Cell onto the flatbed of a truck at Armageddon. Rikishi was also apart of the botched storyline where Stone Cold Steve Austin was run down by a mystery driver, which was revealed to be Rikishi several months later. Rikishi spoke about the death of Yokozuna, and revealed some intimate details about Rodney Anoa’i in real life. More topics of discussion included the debut of Trish Stratus, the creation of the XFL, the birth of the stinkface, working WrestleMania 2000, and Triple H marrying Stephanie McMahon.

Rikishi is a nice guy, and often avoids making negative comments about anyone, but Sean Oliver managed to get some evil remarks about Tony Garea, Harvey Wippleman, and former WWE Diva Debra Marshall. He also attempted to make sense of the Samoan Family tree – good luck! Rikishi talked about some of the WWE business that was going on at the time.

The year 2000 belonged to Kurt Angle, and I would have loved it if he was chosen to be the guide for KC’s tour of the year. Fans of Kayfabe Commentaries will enjoy this one, but if your picky about your DVD purchases then get the 1987 edition or wait for the next release – 1983, with “Magnificent” Don Muraco.

Purchase this DVD at www.kayfabecommentaries.com

Reviewed by Alan Wojcik of www.alanwojcik.com

In the year 2000 World Wrestling Entertainment was still called the WWF, Triple H was close to 100% healthy, the Rock was just a wrestler, Eddie Guerrero & Chris Benoit were alive; coming over from WCW with Perry Saturn & Dean Malenko and oh yeah World Championship Wrestling existed with writers Ed Ferrera and Vince Russo running the ship. Plus Rikishi was working his way up the roster to main event support status with the Too Cool gimmick (w/Scotty 2 Hotty & Grandmaster Sexay). Kayfabe Commentaries sat the former Intercontinental champion down for the new installment in Timeline: the History of WWE. Like the 1987 DVD with the Honky Tonk Man, Sean Oliver sits down with the former WWE star taking him through the calendar, talking about the highs and lows.

Rikishi and Oliver discuss some of the following items: The arrival of the Radicalz from WCW, the creation of the WWF New York restaurant, the birth of the Stinkface, the death of Yokozuna, the birth of the XFL, Gillberg, the arrival of Trish Stratus, the birth of the Stephanie-Triple H relationship, working WrestleMania 2000, his Samoan heritage and its place in the business, the Right to Censor gimmick, wrestling Kurt Angle in King of the Ring and working with the McMahon’s.

Like Honky Tonk Man, Rikishi is an eloquent speaker but unlike Honky, Rikishi had the benefit of working for WWF since the 1990’s in one character (The Headshrinkers tag team, the Sultan) or the other. He takes some shots at Pat Patterson, Tony Garea and Harvey Whippleman that I will leave alone. He doesn’t hold back his feelings on any topic like Johnny “Ace” Laurinitis (who would later hand Rikishi his release from WWE), Stephanie winning the Women’s championship, the backstage WWF political games, being the mystery driver who ran over Austin and the Hardcore championship. I was surprised his reaction to when he won the I-C title from Chris Benoit and his success in WWE during 2000. The comedy relief comes from Oliver trying to get the Samoan family tree written out by Rikishi, I think I was listed in this segment. If you liked the 1st Timeline DVD you must get this one!!

The next DVD releases listed for release on www.kayfabecommentaries.com are Guest Booker with James E. Cornette and YouShoot with New Jack.

Alan J. Wojcik can be reached through http://alanwojcik.com