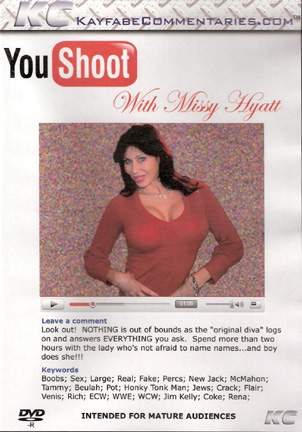 Description: She is known by those who know her best as the “Walking Riot,” leaving a trail of controversial footprints behind her everywhere she goes. She may very well be the most misunderstood wrestling personality to ever grace the business. What you see isn’t always what you get when Melissa Ann Hiatt morphs into the no-holds-barred character of “Missy Hyatt.”

KayfabeCommentaries.com director Sean Oliver has come up with some pretty innovative ideas to spice up the bloated shoot interview market. His first creation was a series of “Guest Booker” DVD’s featuring some of wrestling’s most creative minds rebooking specific eras of professional wrestling. These DVD’s literally put Sean Oliver’s KayfabeCommentaries.com on the map. From there, he created a concept based on the famous CNN YouTube debates (or as I call them, televised sleeping pills). KC put a spin on the typical shoot interview, and allowed the fans to ask the questions; by email, or in special cases, by video submissions. The concept launched with the “YouShoot: The Honky Tonk Man” DVD, which was an instant success. Now it is time to REALLY get dirty, inviting Missy Hyatt into the hot-seat to field questions from her passionate fans and critics. Missy declared, “No Holds Barred!”

I popped this DVD into my player with an open mind, knowing that they would probably cover some topics meant exclusively for a “mature audience,” and while I am not easily offended, I do believe there is a time and a place for such vulgarities – and wrestling isn’t one of them. My current impressions of Missy Hyatt are that she was a wonderful human being, and her wrestling character has the potential to be pure brilliance, but only when she is kept on a tight leash by somebody who understands how to guide her in the right direction. Anybody who attempts to present over-imaginative sleaze in the wrestling business comes off as somewhat desperate as far as I’m concerned.

With the exception of a couple very X-rated rants on oral sex, penis size (naming names), and breasts (whose are fake and whose are real?), I was impressed with Hyatt’s behavior and attitude towards answering questions from the audience. She came off as bright, open-minded, happy, definitely not bitter, and basically enjoyed the experience from beginning to end. I couldn’t help but mark out and smile when the questions I personally submitted were read aloud, and my name was mentioned, along with a plug for Online World of Wrestling. Wooooo! Ya just can’t beat that. Thank you, Sean! For all the perverted topics covered there was just as much intelligent wrestling-oriented discussion. The best thing about this concept is that no question goes unasked. The last few segments were by far the best, because they really went into detail about the wrestling business. If you’re easily offended, you’re probably not a wrestling fan anyway, but if you don’t mind living through the sleaze to get to the breeze then you’ll get a big kick out of Missy Hyatt’s YouShoot DVD.

Rating: 8 / 10 – Check out KayfabeCommentaries.com and all the great content and merchandise they have available!

Description: In the weeks leading up to the release of the second installment of the You Shoot series from Kayfabe Commentaries, the company uploaded teaser trailers of this volume’s guest, Missy Hyatt. These trailers were entitled Missy on Boys, Missy on Girls, and Missy on another planet, and warned the viewers to brace ourselves for a wild ride. Now I knew beforehand that Missy has been known for her over the top reputation in the wrestling business, but never have I watched a trailer for a wrestling DVD and found myself speechless with the insane comments emanating from someone’s mouth, so this week, I took KC’s advice, braced myself, and popped in the full length DVD and went for a roller coaster ride with Missy Hyatt.

First off, for those who are still not familiar with the You Shoot series, it is the new evolution of the wrestling shoot interview, as the entire feature is conducted by you, the fans, via video and email submissions, nothing is off limits, and some craziness ensues. Trust me when I say that you’ve never seen a shoot interview like it.

Now For those of you who are familiar with the format, beyond the addressing of submitted questions ,there is something different in this volume as Missy plays a couple of games that will leave your jaw hanging. The first game is “What A Dick” where Missy is asked to rank wrestlers by penis size from biggest to smallest, and even circumcised or uncircumcised!! There is some gems in this part of the interview as Missy reveals who blew a load after just french kissing, who could last less than a second, and sets the record straight on Val Venis’s porn star gimmick! The other game is “Real or Fake” which as you could probably figure out is Missy having to declare whether the diva in question has real or fake tits.

In press releases hyping the dvd’s release, those at Kayfabe Commentaries hoped that the slight tweak to the format would increase the enjoyment of the feature by those who raved about the first installment with The Honky Tonk Man, and I think it did exactly that, as not only does it provide for some of those moments that left me speechless when watching the trailers, but it also provides for a slightly better finished product as the viewer doesn’t have to put up with multiple submissions asking the same question about a different star.

The rest of the feature is divided into 7 different main topics, which are as follows…

Gossip – Missy has been a queen of gossip for many years so it was obvious that some hearsay emails would be sent her way, including those that may or may not of directly surrounded her experiences. Some not so direct gossip questions include whether Tammy Sytch would give blowjobs to Jim Cornette while in OVW in hopes of advancing to the WWE, Also whether Vince Mc Mahon really fools around with the divas he employs, which leads to a direct question of whether or not she has ever fooled around with Vince, I won’t spoil the answer, you’ll have to see the DVD for yourself!

Sex and Drugs – What Missy Hyatt DVD would be complete with touching on her escapades with sex and drugs in the wrestling business? I submitted a question for this topic as I got Missy to address the rumours of her being involved in a Sex Lottery a few years back in Reno, Nevada where people could buy a lottery ticket and the winner would get to meet and have sex with Missy in a hotel room. She doesn’t deny it, and yes she did the winner! And now you get to hear the details of that story as well as other important topics such as whether she prefers circumcised penis, whether she would ever do hardcore porn. We also get to learn a new math formula to determine just how many guys she has slept with in the wrestling business, I was never good at math, but something tells me that you’ll agree that her formula could be way off.

Beefs – Much of this chapter surrounds the numerous over the top comments that New Jack has made about Missy Hyatt over the years. Missy laughs off and denies Jack ‘s allegations of talking to inanimate objects, reporting herself missing and whether her doctor killed himself because of her. Missy’s other beef with Eric Bischoff is also looked at in this chapter.

Conquests – Just who has she slept with in the wrestling business? We’ve all heard the rumours, and now she goes on record with names, and rants on her relationship with Jason Hervey.

Territories – Thoughts and stories of Missy’s time in Georgia Championship Wrestling, as well as her feud with “Sunshine” in Texas. Missy also touches on whether or not the Von Erich family was as screwed up as some think, and her experiences in the WWF doing Missy’s Manor.

Modern Wrestling – In this chapter Missy’s thoughts are given on woman in wrestling in 2008 and why they should not be in the ring wrestling. She also tells us what she would do with the girls on TV today if she was the one in charge of the woman’s division in the WWE.

Miscellaneous – A variety of topics including what she thinks Eddie Gilbert be doing if he was still alive today?, Which promoters does she respect the most, and if she has lost contact with any friends in the wrestling business that she would like to reconnect with.

This DVD comes in at over 2 hours, and much like the first You Shoot, the time just flies by, the flow of the DVD is so flawless, perhaps thanks to some great editing, or some great planning on the organizers part, but probably a combination of both, which is why this DVD and so many others from Kayfabe Commentaries have been met with such a positive reaction. For the record the DVD is intended for mature audiences as there is not only graphic sexual discussion but also some swearing, which is absolutely fine with me, you just gotta take that into consideration when your about to watch it as you don’t exactly want your little sister around when Missy Hyatt starts talking about penis! All in all another great DVD release from Kayfabe Commentaries that I’d recommend you picking up sometime soon.