MsChif: To Torment And Desecrate 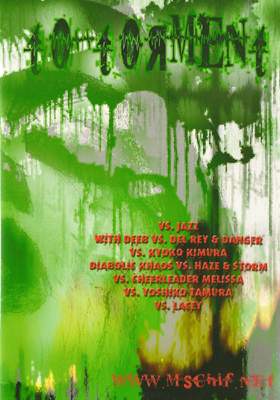 To Torment And Desecrate

MsChif vs. Jazz (June 24, 2006): A semi-final match during the ChickFight 5 tournament saw MsChif face off with former WWE Women’s champion and ECW alumni Jazz. If there was one wrestler who wouldn’t be intimidated by MsChif’s head games, it would be Jazz. I remember seeing this when I originally watched my ChickFight 5 DVD, and feeling distracted because it followed an incredible contest between Cheerleader Melissa and Yoshiko Tamura. It was a tough act to follow, but I was able to appreciate the Jazz-MsChif showdown more this time around. Jazz used the STF to make the flexible MsChif tap out and advance to the finals, where she would lose to Melissa.

MsChif & Serena Deeb vs. Allison Danger & Sara Del Rey (February 24, 2007): Straight out of Ring of Honor’s “Fifth Year Festival” celebration, SHIMMER Women Athletes were given a spot on the big stage at ROH. MsChif and OVW star Serena Deeb went up against Allison Danger and Sara Del Rey, collectively known as the Dangerous Angels. Whenever I see the combination of Danger and Del Rey I am struck by the fantasy of seeing them wrestle the Jumping Bomb Angels (Noriyoi Tateno & Itsuki Yamazaki) of the 1980s. MsChif had to carry the debuting Serena, whose lack of seniority meant that she would be elected to get pinned by Del Rey after a Royal Butterfly Suplex. I’m not sure why this was picked to be on a Best of MsChif DVD.

MsChif vs. Kyoko Kimura (August 20, 2006): This match took place in Japan and was part of an outdoor event called Wrestle Expo 2006. Kyoko Kimura is interesting, impressive, and just as intimidating as MsChif. In fact, I was EXTREMELY impressed with Kyoko Kimura! She reminds me of Scary Spice from the Spice Girls, except with amplified savagery. It was a Hardcore Rules match where a chain was used as a weapon in the match. Seriously, where in North America will you see that in a women’s match? MsChif pulled out a great victory and showed something different for this match.

MsChif & Delirious vs. Daizee Haze & Ian Storm (February 21, 2004 – I think): Not many people know this, but MsChif, Daizee Haze, and Delirious all started out in a Missouri-based promotion called Gateway Championship Wrestling. It certainly shows how far they have come, and it’s only appropriate that MsChif include something from her early days to illustrate that growth. Back then, I feel like the jury was still out on Delirious, but you could tell that MsChif and Daizee would become stars. The girls were out to prove how tough they were by taking some huge moves from the men, and scoring some major points for their gender.

MsChif vs. Cheerleader Melissa (January 14, 2007): This was one of the semi-final matches of the ChickFight 7 tournament. MsChif and Cheerleader Melissa were both winners of previous ChickFight tournaments, but this would be the first to take place in the United Kingdom. ChickFight veteran Melissa faced off with her American nemesis, MsChif. These two have all but murdered each other in SHIMMER competition. They did that amazing spot where Melissa locked MsChif in the Inverted Cloverleaf and forced MsChif to kick herself in the back of the head. Youch! Very few people can take that move and walk again afterwards. Melissa continued with an aggressive attack and eventually nailed MsChif with an Air Raid Crash to advance to the finals of ChickFight 7.

MsChif vs. Yoshiko Tamura (August 20, 2006): This was another match from Japan at the outdoor event called Wrestle Expo 2006. I saw Yoshiko Tamura for the first time at ChickFight 5 and I immediately became a life long fan of hers, so I was thrilled to see her on this DVD giving me an opportunity to experience a Tamura match on Japanese turf. This girl will amaze you. Tamura won the clash, and praised MsChif afterwards.

MsChif vs. Lacey (April 15, 2006): This was one of the semi-final matches of the ChickFight 4 tournament in San Francisco, California. The frightful MsChif went head-to-head with an old IWA Mid South nemesis named Lacey. This was another fantastic match featuring two very confident performers with very different styles. MsChif came out on top, pinning Lacey and solidifying her spot in the ChickFight Finals. MsChif would go on to defeat Mercedes Martinez in the finals to become ChickFight 4 champion! Not sure why the finals was not included on this DVD.

Steel Cage Match – MsChif vs. Mickie Knuckles (April 30, 2005): This was the first ever Steel Cage match featured in the notorious IWA Mid South women’s division. Anybody who has seen Mickie Knuckles will agree that she is the opposite of the word DIVA. Knuckles is the female protege of Ian Rotten, and has developed into the female version of her Hardcore mentor. These two had been feuding for a long time, but Knuckles had yet to score a pinfall victory over MsChif. This was a brutal cage match affair, equal or better than most men’s cage matches. MsChif ended up with a bloody forehead, and Mickie (also bloody) finally scored that illusive victory over her long-time nemesis!

Falls Count Anywhere – MsChif vs. Nikki Roxx (June 10, 2006): This was a match for the Professional Girl Wrestling Association, whose champion at the time was the adorable Nikki Roxx (aka Roxxi from TNA). I never miss an opportunity to tell the world how Nikki Roxx has the best ass in the wrestling business, but this is MsChif’s DVD so I will focus on her. The PGWA is a very well-kept secret, and could have gotten as huge as SHIMMER or ChickFight years ago if they knew how to promote themselves properly. This contest got “hardcore” very fast as the action spilled out of the ring and around the building, using everything in sight as a deadly weapon. Pinfalls on the floor were legal, and both grapplers fought for a well-earned victory. The battled over every square inch of that building, pounding and stretching each other into oblivion – but never giving up! Eventually they made it back to the ring, where Roxx finished off MsChif with a Barbie-crusher to retain the PGWA title! MsChif proved to be a sore loser by blinding Roxx with the dreaded green mist in a post match fit of revenge!!!

First Blood Match – MsChif vs. Mickie Knuckles (April 1, 2005): This first blood match in the IWA Mid South promotion was the precursor to the Steel Cage match which we saw earlier on this DVD. I don’t know why they didn’t present these matches chronologically, since they spoiled the finish of this match during the commentary on the cage match. Oh well, you have to let the action speak for itself! Mickie Knuckles bleeds in 90% of her matches, so it was pretty obvious she would be the one to get cut at the conclusion of this battle. The referee was knocked down and MsChif tried to pull a fast one by blowing red mist onto Mickie’s forehead. MsChif claimed it was blood, but the referee did not fall for it and the match continued. MsChif used her spiked vest to rake Mickie’s forehead, and eventually the blood begin to flow from Mickie Knuckles head and MsChif was awarded the victory in this wild brawl!

Steel Cage Match – MsChif & Delirious vs. Daizee Haze & Matt Sydal (????): IWA Mid South promoter Ian Rotten was the special guest referee for this intergender tag team steel cage match. All four participants grew up in the business together, starting out in the Missouri-based Gateway Championship Wrestling before heading to the Mid-west to make a name for themselves in IWA Mid-South. Delirious and Sydal have probably wrestled so many times they could give a great match while blindfolded, and the same goes for Daizee and MsChif. What can I say, nobody was blind-folded and they all entertained the crowd inside the cage until it was all said and done!

Falls Count Anywhere – MsChif vs. Cheerleader Melissa (February 12, 2005): This match took place on SHIMMER Volume 4. Cheerleader Melissa and MsChif took brutality to a whole new level in their Falls Count Anywhere match. MsChif was thrown head-first into a wall causing a small laceration on her forehead. Melissa then dragged MsChif out to the streets and body-slammed her onto the concrete side-walk! In a funny spot, Melissa locked MsChif under the stage to torment her, but then MsChif popped out another door and unleashed her fury on Melissa. A minute later, Melissa cleverly blocked the green mist with a steel chair saving herself from certain defeat. Melissa slammed MsChif on a rolling cart and pushed it under the ring and she slid out the other side and collided with the guard rail. MsChif tapped out to the Inverted Cloverleaf on an elevated platform — but Melissa added insult to injury but putting a chair over MsChif’s head and bouncing her own foot off the chair! This was one of the first attempts by SHIMMER to incorporate gimmick matches into their shows, and it paid off royally!

Falls Count Anywhere Triple Threat Match – MsChif vs. Mercedes Martinez vs. Cheerleader Melissa (April 15, 2006): This was originally a BONUS match included on the ChickFight 4 DVD. Yes, the same ChickFight tournament that MsChif won. Talk about craziness times three. Just one night after MsChif and Mercedez Martinez locked it up in the ChickFight 4 finals, they were joined by Cheerleader Melissa for a shocking three-way falls count anywhere match that will leave you with your jaw hanging wide open when you see the things these brutal beauties of the squared circle do to each other. I’m not even going to spoil the outcome for you, because you have to see it to believe it! Does the phrase “worth the price of purchase” mean anything to you?

Falls Count Anywhere – MsChif vs. Cheerleader Melissa (May 21, 2006): It was time to take the MsChif-Melissa feud one step further with the first ever Last Woman Standing match on SHIMMER Volume 6. They were extremely aggressive right out of the gate and it didn’t take long for the attempted 10-counts to begin. MsChif must have had her spine surgically removed at some point because she gets bent into the sickest positions. It was a brutal match that ended when MsChif nailed Melissa with a weak-looking Desecrator on a folding chair and put Melissa down for the ten count. This match was not as good as their Volume 4 match but still pretty damn intense. You won’t see this kind of women’s wrestling anywhere in the World – and most definitely not in the WWE.

Check out these selections exclusively at www.mschif.net