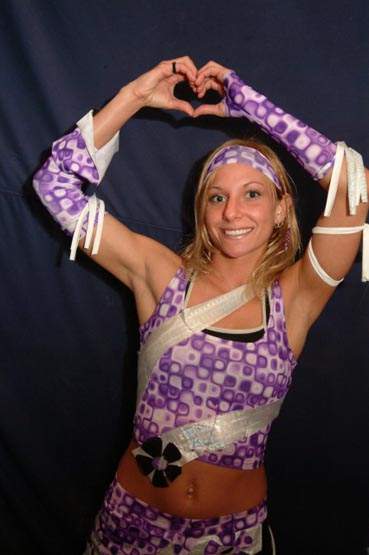 Yet another fun-filled SHIMMER DVD release in the series of successful and revolutionary wrestling events. Volume four started with the remaining member of Team Blondage, Amber O’Neal, wrestling the Boston beauty Nikki Roxx in a solid opener. Nikki Roxx is the total package as far as SHIMMER athletes go, and as far as I’m concerned the sky is the limit for her. Amber O’Neal is perfect on this spot in the card because she understand the southern heel style of riling up the fans. Nikki Roxx won the match but both women proved that they were very talented wrestlers. Who rocks? Nikki Roxx!

The second match featured Toronto’s Shantelle Taylor taking on the debuting Ann Brookstone, who I did not realize is actually Ann Thraxx (They must have changed her name due to the terrorist association with antrax). Shantelle was severely out-muscled but beat the odds and scored the unexpected pinfall over her larger opponent. Shantelle was the star of the match.

In a heated tag team match stemming from the altercation that took place on SHIMMER Volume 3, the energetic team of Cindy Rogers and Lorelei Lee went head-to-head with the experienced team of Lexie Fyfe and Malia Hosaka. They should really think of a cool team name for heelish Fyfe and Hosaka. They flexed their muscle and used their superior skills to defeat their less experienced opponents. Very good tag team match. Lorelei Lee has a great look and a nice build — I hope she continues to improve and becomes a star because I can sense potential within her. Side Note: I would really look forward to seeing a match between Malia Hosaka and MsChif at some point down the line.

Coming off a disappointing loss at the hands of Ireland’s Rebecca Knox on SHIMMER Volume 3, Allison Danger looked to get back on track with a victory over Canadian bad-girl Tiana Ringer. Allison Danger, who by the way doubles as a color-commentator when she isn’t wrestling, found herself standing in the winners circle when it was all said and done.

Tiana Ringer has come a long way in a short period of time. She plays a heel to perfection, and I’m sure she’s happy to be wrestling somebody other than Shantelle Taylor. They got their start in the business together in Toronto and only had each other to wrestle for the first portion of their careers. It should be noted that Shantelle Taylor was signed by WWE shortly after this taping.

At this point they played a tape of Rebecca Knox delivering an amazing promo talking in her intoxicating Irish accent about her match with Allison Danger on SHIMMER Volume 3 and her upcoming bout with Daizee Haze later on this show. Rebecca promised to give Daizee Haze an education in the school of K-Nox. What a great technical wrestler Knox is, and now with her brash attitude and undeniable spirit she pulls you right in with every word she speaks. Brilliant, just brilliant.

I enjoy all of the SHIMMER matches, and it’s hard to pick a favorite, but if I absolutely had to narrow it down to the one I like the most, it would be Sara Del Rey! She was trained by American Dragon, who I also think is amazing; Dave Prazak went as far as calling her “American Angel” on commentary – which I think is a nice touch. Del Ray faced, and defeated, the Minnesota home-wrecker Rain to increase her unbeaten streak to 4-0. If they ever create a SHIMMER World title, Del Rey would be the perfect candidate to carry that prestigious championship.

Cheerleader Melissa and MsChif took brutality to a whole new level in their Falls Count Anywhere match. MsChif was thrown head-first into a wall causing a small laceration on her forehead. Melissa then dragged MsChif out to the streets and body-slammed her onto the concrete side-walk! In a funny spot, Melissa locked MsChif under the stage to torment her, but then MsChif popped out another door and unleashed her fury on Melissa. A minute later, Melissa cleverly blocked the green mist with a steel chair saving herself from certain defeat. Melissa slammed MsChif on a rolling cart and pushed it under the ring and she slid out the other side and collided with the guard rail. MsChif tapped out to the Inverted Cloverleaf on an elevated platform — but Melissa added insult to injury but putting a chair over MsChif’s head and bouncing her own foot off the chair! I’m glad SHIMMER finally decided to incorporate gimmick matches on their shows. They just need to create one or two championships now.

Then it was time for the main event. The feisty Irish spitfire Rebecca Knox took on the queen of the main events Daizee Haze — seriously she’s main evented all four SHIMMER DVDs. As I said earlier, Rebecca Knox is just brilliant and this match did not contradict that statement. It wasn’t overly gimmicked like the previous match but it was a knock down drag out technical masterpiece with excellent effort put in by both athletes. The last two matches on this show are more than enough reason to buy this DVD but the rest of the matches are frosting on the cake. Another fun ride with wrestling’s top female talent.