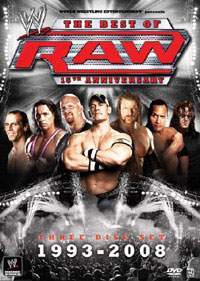 In the eyes of many, the word “Raw” has become synonymous with wrestling on television over the past 15 years of Monday nights. At its best, the palpable atmosphere of unpredictability created by Raw throughout its various incarnations is unique among most any form of entertainment.

During its run, Raw has set numerous records for longevity, number of episodes, viewership, and others. It is perhaps the only program in history to become a legitimate threat to the ratings dominance of Monday Night Football. But football is only around for 4 or 5 months of the year, and as it has been said many times, wrestling has no off-season. That constant need to keep its audience engaged in the action combined with the environment of a live broadcast has led to hours upon hours of exciting, compelling, violent, silly, sophomoric, and furious action. Even with all of that said, those aren’t even half the reasons to own the 3-disc Best of Raw 15th Anniversary Collection. No amount of rhetoric can convey what makes the moments both legendary and obscure comprising the 9 hours of footage so essential to anyone’s wrestling DVD library.

Disc 1 serves up such classic early moments as Ric Flair‘s last WWE appearance until 2001, taking on Mr. Perfect in a Loser Leaves Town match from only the show’s third episode. Also, there’s the 1-2-3 Kid’s shocking upset of Razor Ramon, in addition to Marty Janetty taking the Intercontinental title from former partner Shawn Michaels in what was voted Match of the Year for 1993. Other unearthed gems include Bret Hart vs. the 1-2-3 Kid in a dramatic back-and-forth contest along with a hellacious brawl between Mankind and the Undertaker. A moment that makes owning this set truly worthwhile comes with Owen Hart and the British Bulldog vying to become the inaugural European Champion from March 1997. This match takes on a certain poignancy these days in light of the tragic fate met by each man, but nonetheless showcase both at their very best, which is exactly how they should be remembered.

However, as things move into the Russo era on disc 2, the majority of the highlights involve Stone Cold driving something big, DX doing something annoying and every other manner of asinine vignette or promo instead of, you know, wrestling matches. And even the ones that are here are overbooked clusterf**ks relying on stipulations instead of ring psychology (sound familiar TNA fans?). Disc 3 bring us to the more recent past of Raw and catalogues such invaluable footage as the hilarious “Rock” concert with the Brahma Bull himself absurdly butchering various songs, highlights of the “Trial of Eric Bischoff”, Edge and Lita‘s Live Sex Celebration and so on. And inevitably, there are also a number of redundant segments involving DX attempt to humiliate Mr. McMahon. All is not totally lost however as we get the instant classic that was Shelton Benjamin against HBK in 2005’s Gold Rush tournament. Also, from that same year’s Homecoming special there is Shawn Michaels once again, this time facing Kurt Angle in a 30 min. Iron Man match.

There are some notable omissions, but the fact that a couple of the more obvious ones involve Chris Benoit makes the reasoning behind those decisions self-explanatory. Still, he and Jericho defeating Austin and HHH for the tag titles in May 2001 (also the match in which Trips blew out his quad the first time) as well as his cage match with Angle only weeks later on June 11, were each so incredible that it’s a shame neither one was included. Regardless, what is included is more than sufficient, especially when considering that it can be picked up for around $20 some places. Part nostalgia trip, part history lesson, this set ultimately adds up to more than the sum of its parts. And there’s plenty more where that came from, as there will no doubt be another volume for the 20th anniversary. In the meantime (and arguably now more than ever) wrestling fans can use this little reminder of how on any given Monday anything can happen on Raw.