Home / Behind the Scenes / Weekly Wrestling Quiz for December 5, 2016 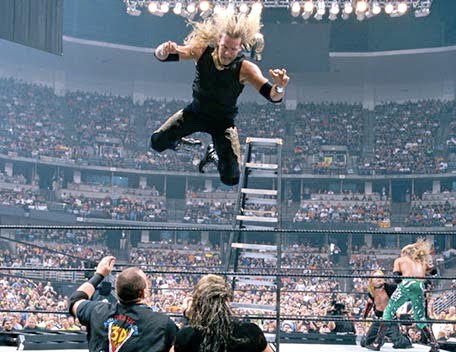 Welcome to The Armpit wrestling quiz for the week of December 5, 2016.  It was a refreshingly slow news week, which was very welcome.  But we did have the WWE TLC PPV, and so the theme of this week’s quiz is “Ladder Matches.”

Congratulations to last week’s winner, who happens to be a repeat winner from the past: Megan.

1) The NFL team that did NOT draft Bill Goldberg was the San Francisco 49ers.

2) Bill’s older brother, Mike Goldberg, was once the roommate of Ric Flair when both were students at the University of Minnesota.  I’d imagine Mike has some wild tales from those days.  Can you imagine your brother is currently the hottest babyface in pro wrestling, and your college roommate was perhaps the greatest wrestler of all-time?  That’s some great company right there.

4) Goldberg’s famous WCW title win over Hollywood Hogan aired free on Nitro, defeating Raw in the ratings that week.  It was possibly the biggest moment in WCW history.  They were soundly criticized at the time for not saving the match for PPV, where it would’ve made millions and surely broken the record set by Hogan vs Sting months earlier.  But in hindsight it didn’t really matter given what happened.

5) There was fear the Toronto fans at Survivor Series would boo Goldberg, because he’s the one who gave Bret Hart a concussion with a stiff super kick at Starrcade ’99.  With all the super kicks we see these days (Young Bucks, for example), I’m surprised that doesn’t happen more often.

6) Goldberg injured his arm badly in December of ’99 by punching through a limousine in a backstage angle.  It remains one of WCW’s stupidest moments, and imagine the ground that covers.

7) At WCW Fall Brawl 2000, Scott Steiner had an excellent match with Goldberg while wearing a face mask.  The mask was worn because he was selling an injury from a TV angle in which Goldberg had hit him with a lead pipe.  A rare sign of continuity shown by WCW booking.

8) On his first Raw appearance in 2003, Goldberg got into a backstage altercation with Chris Jericho.  Jericho is quite the brave soul, starting fights with both Goldberg and Brock Lesnar and somehow surviving both without decapitation.  Detailed rundowns of both fights, by the way, are available in the Armpit’s Backstage Fights section.

9) At WrestleMania XX, both Goldberg and Lesnar were loudly booed by the MSG crowd because they all knew it was the final match for both.  They saw them as “selling out” and moving on, which didn’t sit well with them.  HHH once said Lesnar’s leaving was the “dumbest move ever,” which has to be the dumbest comment ever, because Lesnar has made a fortune as a result of his leaving WWE back then.

Related Items
← Previous Story Weekly Wrestling Quiz for November 28, 2016
Next Story → Wrestling Legends Gather to Honor One of Their Own