Home / Behind the Scenes / Weekly Wrestling Quiz for November 28, 2016 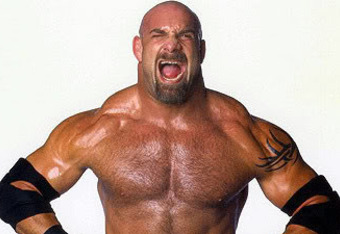 Welcome to The Armpit wrestling quiz for the week of November 28, 2016.  We took last week off for Thanksgiving, and while we were gone the Survivor Series main event was all the talk in pro wrestling.  Therefore this quiz will be about “Bill Goldberg.”

1) Trump Plaza hosted WrestleManias IV and V.  Vince probably got a great deal on those venues, but they made for a very poor atmosphere (especially as the NWA had red hot shows in opposition on free cable TV at the same exact time).

3) At WrestleMania XX, Donald Trump was interviewed at ringside by a former Governor himself, Jesse Ventura.  Whenever celebrities like Trump sit in the front row, I always wonder where they use the restroom.  I can’t imagine Trump or any other celeb standing in line with everyone else, but the visual is funny.  Maybe they wear giant adult diapers like Jim Ross did when he called the Wrestle Kingdom 9 show in Tokyo.

4) The Bobby Lashley vs Umaga match at WrestleMania 2007, which set business records thanks to Trump’s involvement, was a hair vs hair match.  That is the night, of course, where Trump and Steve Austin shaved Vince McMahon’s head.

5) In storyline, Trump purchased Monday Night Raw from Vince McMahon, and then sold it back to him for twice what Vince paid.

6) Trump’s first move as the new owner of Raw was to air the show the following week without commercials.  Most of you missed this question.  This gimmick led to a significant increase in the ratings that week.

7) The Lashley vs Umaga match at WrestleMania 23, with Trump and Vince in their respective corners, was billed as the “Battle of the Billionaires.”

Please email your answers to [email protected].  We will randomly generate a number to determine the winner.  For example, if the number is 25 and you’re the 25th person to email us with correct answers, you win.  Winners receive a free copy of our brand new e-book “The Armpit Wrestling Quiz Archives: Volume 1.”  It features 128 quizzes we’ve written over the years and clocks in at 420 pages and a whopping 1,079 questions on pro wrestling history dating back to the 1980s.  We’ll also announce your name here next week, along with anything you’d like to promote (assuming it’s not X-rated or illegal).  It could be your name, blog, Twitter handle, or anything else you’d like us to mention.

This week’s feature: Our “Greatest Matches Ever” series continues with Q3 of 2016, where we examine the plethora of ****+ matches that took place all around the world.  This took a lot of work to compile, but it’s worth it because Q3 may have been the best quarter ever in terms of pure match quality.