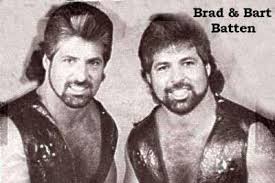 ICW and WWC star Brad Batten passed away on Novemver 18, 2014. Batten was one half of the Batten Twins tag team in the 1980s. The twins were trained by Angelo, Randy, and Lanny Poffo and worked for the Poffo’s International Championship Wrestling. They had a run in the Central States area, and also worked Puerto Rico for the World Wrestling Council, winning the WWC Tag Team Titles and the WWC Caribbean Tag Team Titles.