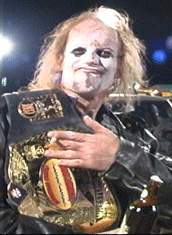 *Before the show started, a video tribute to Alan “Beetlejuice” Carnill was played as the IWF locker room stood ringside and in the ring, followed by the traditional 10-bell salute.

*Before the show’s matches officially got underway, IWF Heavyweight Champion Hoodlum came to the ring with “The Unreal” Joshua Michael, and accused Bronx of being the masked man who attacked him last month. Bronx came out and said that it wasn’t him. Hoodlum then challenged him to a match for the IWF title, which was accepted. The Miracle That Is Tony then came to the ring and complained that he should be champion, since he technically pinned Hoodlum last month (the decision was later reversed). IWF co-commissioner Bigg Mike came into the ring and immediately made a match between Tony and Josh.

Singles Match: “The Unreal” Joshua Michael vs. The Miracle That Is Tony
Tony defeated Michael via Count-Out after Michael was attacked by the masked man outside the ring and was unable to get back into the ring.

*After the match, A3 Champion Chris Wrath, who was attacked by Tony last month, charged the ring and chased Tony off. IWF co-commissioner Bigg Mike then ordered a match between the two for later in the show.

*After the match, the masked man attacked Hoodlum with a chair, busting him open. As he attempted to sandwich Hoodlum’s neck in the chair, Joshua Michael ran to the ring and chased him off before further damage could be done.

*The next match was supposed to be IWF Hardcore Champion Joey Terrofyin vs. Joey A. for the title. Before the match could get started, however, Terrofyin said he would not wrestle Joey A., and then attacked Joey A.’s arm with the title belt and the chair. Terrofyin noticed several local wrestlers in the crowd, and challenged any of them to take Joey A.’s place in the match. Former IWF wrestler Juntsu, who had recently retired, was also in the crowd as a fan, and he accepted Terrofyin’s challenge. Joey Terrofyin, seemingly scared, tried to talk his way out of the match, saying Juntsu couldn’t wrestle because he didn’t have gear with him. Juntsu responded by saying that Joey forgot Beetlejuice’s cardinal rule when attending shows-always bring your gear. He then revealed that he had his wrestling gear on underneath his street clothes, which prompted IWF co-commissioner to make the match official.

*After the match, Joey Terrofyin shook Juntsu’s hand, and they embraced with a hug in the ring as a tribute to Alan.