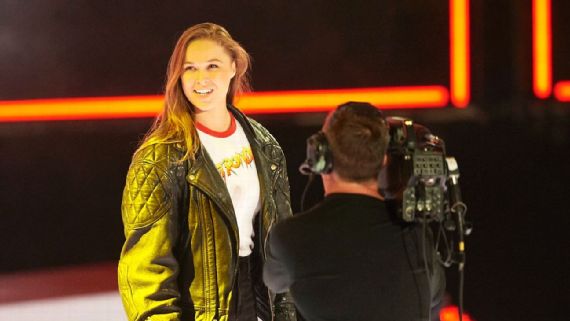 PHILADELPHIA — Long before she was an Olympian or a UFC champion or — after Sunday night, a WWE regular — Ronda Rousey had a well-honed prefight ritual.

“That was something my mom taught me,” Rousey said Sunday afternoon, before her surprise show-stealing appearance at the WWE’s Royal Rumble at the Wells Fargo Center. “Judo tournaments last all day, so you have to sleep between matches. It’s hard at first, but then it just becomes this adrenaline dump.”

As a UFC fighter, these naps became sacred to Rousey. Anyone who’d interrupt wasn’t just asked to leave the dressing room, but they were also snarled at, cussed out or thrown out. That’s how tense it was before her fights. That’s how much pressure she felt, not just to win but also to carry the mantle for women in combat sports, and maybe everywhere.

“Thinking back on it now — every single title fight that I won, I cried myself to sleep that night. Every single one,” she said.

There was plenty of noise in Rousey’s dressing room Sunday night before she made her appearance at the Royal Rumble. But it had a completely different feel. She was loose and light and happy.