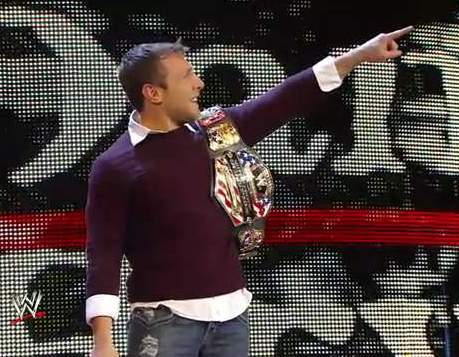 Happy New Year to all of you…

As 2011 ends and 2012 begins, it’s time for the 15th annual AS I SEE ITYear-End Review. As usual, I should note that my selections are based on whatI’ve actually seen this year, either live, online, on TV, or via tape/DVD;which primarily means North American wrestling.

WWE- pretty much by default, owing to their businesssuccess. While WWE isn’t the wrestling that many of us wish we were seeing, thereality is that they put asses in seats, are geniuses at marketing, and makemoney. Wrestlemania is still the destoination PPV for wrestling fans,regardless of how smart they think they are, and whatever they say about theMcMahons. Ring of Honor can’t say that yet, and with the sale to SinclairBroadcasting…it’s hard to say how their longterm business willprogress.

It remains to be seen if the potential shift of many monthlyPPVs to the new WWE Network will allow them to keep making money as they havebefore; but for now, there’s pretty much one name to give this award to.

CM Punk, WWE – What mainstream wrestler has actually gottenfans like most of us who follow the business online more than CM Punk? He’sbeen one of the rare instances of a wrestler actually getting a characterover…somehow without too much interference from WWE’s powers that be. Heactually got over the same character he portrayed in Ring of Honor, withthreats to “win the WWE title, and take it outside the company”.He won the WWE Heavyweight Title for a second time in Chicago on July 18 in front of one of thewildest crowds I’ve ever seen, and walked out with the belt through thecrowd to close the PPV.

He actually brought off the angle for awhile, going toindependent shows; before WWE rushed him back FAR too fast on TV and”re-signed him to a contract”. His latest bit of doing “pipebombs” on air, seems to be an acknowledgement by WWE that not everyone’sbuying in to John Cena as superman; and that something else is needed.

The Great Khali – Since Lacey Von Erich retired, we cango back again this year to The Great Khali one last time as the”winner” of this award. Other than being big, he seems to have verylittle in the way of talent, and doesn’t even look intimidating. Sadly, he’sVince McMahon’s idea of what he sees as no more than a circus freak to beexhibited. Khali’s contract expired this year. Have to wonder if Jeff Jarrett’sproject in Indiawill attempt to use him for the same reasons.

The Briscoe Brothers – with Davey Richards and Eddie Edwards working each other, Chris Hero and Claudio Castagnoli in different companies,and Beer Money broken up; The Briscoes win this one. They’ve looked strongin ROH this year, and worked as Tag Team Champions earlier in 2011 for CombatZone Wrestling.

2011 ANGLE/FEUD OF THE YEAR WINNER

CM Punk vs. WWE – A year long storyline, with a leadoff that could have been so much better had WWE given it time. Punkahas been one of the few consistently entertaining things on WWEtelevision this year, looking forward to what he might say or do next. As 2011ends he now has stiff shirt John Laurinitis as a foil representing WWE. Whatmight be the single funniest moment of the year took place when Punkvoiced over a “tribute” to Laurinitis wit lotrs of Dynamic Dudescomedy footage.

2011 WORST/MOST TASTELESS ANGLE OF THE YEAR

Michael Cole using real-life death of Jerry Lawler’s motheras storyline fodder – In a wrestling dictionary definition of cheap heat, theFebruary 21 RAW saw Michael Cole telling Jerry Lawler how his mother(who had just died after a battle with Alzheimers) would be “disappointedin him” after his loss to The Miz. Lawler is as old-school as they come,and gets using anything to get heat on a heel. But to use the deathof someone’s mother…especially given her battle with Alheimer’s, barelyknowing who Lawler was at the end, seems like the worst kind of cheapheat. Michael Cole has “go-away” heat as it is, not heel heat.heel heat draws money, while “go-away” heat means people switchchannels and not order PPVs if they have to listen to it for 2 or 3 hours. Hitpeople with something as senistive as that…makes things even worse.

WWE: CM Punk vs. John Cena, WWE Money In The Bank, Chicago, IL, July 17, 2011-In a time of monthly PPVs (or even two weeks apart), it’s hard for anything atall to stand out. But this match did. These two pulled out everything youthought possible from them (so the next time someone tells you Cena can’twrestle, pull out this DVD and make them watch it). Couple that with oneof the wildest crowd atmospheres I’ve ever seen (and I got to see the best daysof ECW at the ECW Arena), and you get a Match of The Year

Independent: Mike Quackenbush- Eddie Kingston, CHIKARA ProWrestling, ECW Arena, November 20, 2011 – It seems oddly appropriate that inwhat will likely turn out to be CHIKARA’s last regular show at the ECW Arena(the show in December was a Joshi show with a handful of CHIKARAworkers in matches); they may have pulled off one of their best singlesmatches I’ve ever seen. CHIKARA had not had a Heavyweight Champion for itsentire history, and only now crowned a Champion with this match. Quackenbushand Kingston worked a great match, told a incredible story (including Kingstononline promos to set up the reason behind the match, and sent the fans homehappy with the “right” results.

WWE: WWE Money in the Bank 2011 – Allstate Arena; Chicago,IL July 17, 2011If this PPV had no more than the CM Punk title wiin in front ofone of the craziest crowds ever, this PPV might have won the award on thatalone. But add in the SmackDown Money in the Bank ladder match tha wBryan “Daniel Bryan” Danielson finally get elevated in his win overCody Rhodes, Heath Slater, Justin Gabriel, Kane, Sheamus, Sin Cara, and WadeBarrett; Del Rio go over
Alberto Del Rio beat Alex Riley, Evan Bourne, Jack Swagger, KofiKingston, R-Truth, Rey Mysterio, and The Miz in the RAW Money in the Bankmatch,
Christian winning the World Heavyweight Championship over Randy Orton by DQ,and finally Punk winning the WWE Championship in Chicago; that does it forme.

Independent: CHIKARA King of Trios 2011/Night One,April 15, 2011, ECW Arena – Each year, this event is a indy show of theyear candidate, and this year didn’t disappoint either. Highlights included:Mike Quackenbush, Jigsaw, and Manami Toyota defeated The Amazing Red and theMaximos after a ’68 Comeback Special by Quackenbush, followed by a top ropeelbow by Jigsaw on Will Maximo at 10 minutes (my first time seeing thelegendary Manami Toyota in person); Team Dragon Gate (Super Shisa/AkiraTozawa/Kagetora) defeated The Spectral Envoy(Hallowicked/Frightmare/UltraMantis Black) after Super Shisa hit the Yoshitonicon Frightmare at 15 minutes; Team Osaka Pro (Atsushi Kotoge/DaisukeHarada/Ultimate Spider, Jr.) defeated the trio of the Throwbacks (DasherHatfield/Sugar Dunkerton) and Matt Classic after Ultimo Spider Jr. cradled MattClassic at 17 minutes with a La Magistral. But the absolute highlight of thenight had to be Team Michinoku Pro (Great Sasuke/Dick Togo/Jinsei Shinzaki)defeating Team Minnesota (1-2-3 Kid/Arik Cannon/Darin Corbin) after aDick Togo senton on Darin Corbin after 23 minutes. Watching the “original”Michinoku Pro team that worked ECW Barely Legal; and watching Sean Waltmanbring out his working boots to an incredible post-match crowd reaction, whichhe was apparently really touched by.

TNA Victory Road 2011, March 13, Orlando, FL- If a disasterof a main event Sting (working injured) versus Jeff Hardy working impaired inthe ring for a two minute main event wasn’t enough of an embarassment forTNA, how about a non decision in the semi-main event right before it todecide a #1 contender, and continued segments throughout the PPV ofthe “honeymoon” of Jeff and Karen Jarrett (former wide of KurtAngle)…and asking people to PAY for it? TNA itself thought it was so bad, itgave 6 months of free TNA-On-Demand to make up for it?

ROH on HDNet, HDNet/Ring of Honor on Sinclair – Forpurposes of convenience, we’ll call this one entry. Ring of Honor’stelevision is the one (more or less) nationally televised show that giveswrestling the spotlight; not clowns, jugglers, guys pretending their hand is asnake, and 15 minute promos…and then there’s TNA Impact.

TNA Impact, TNA – In a upset as shocking as MichaelCole “winning” the worst announcer award, here is the worst show ofthe year. Never has so much talent been wasted so much by inept andinexplicable booking as has happened over the last 2 years by TNA; not even theworst years of WCW Monday Nitro. .

Jim Ross, WWE. You were expecting the “voice of theWWE”, maybe? Despite being stuck in the embarassing Michael Colevs. JR styoryline on and off all year… when Jim Ross got to actually call amatch, you know why fans have been BEGGING Vince McMahon to let him justannounce; making the reason RAW ratings are down really clear….thatVince McMahon isn’t. I don’t care if Vince McmHaon has to build him hisown studio in Oklahoma so he doesn’t have to travel with his health beingwhat it is….Jim Ross needs to call WWE.

Michael Cole, WWE Monday Night RAW: In a shocking upset, Michael Cole repeatsfor the third straight year as the worst heel announcer of all time. The veryname of the definition of go-away heat has now changed from “X-PacHeat” to “Michael Cole heat”.

2011 WRESTLING NEWS STORIES OF THE YEAR