Home / Podcasts / Ashley Massaro on Between the Ropes

Ashley Massaro on Between the Ropes 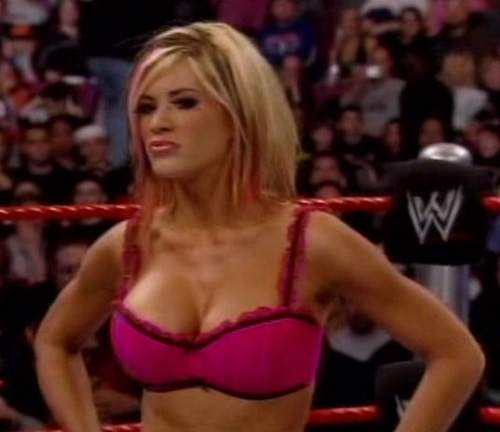 Between The Ropes
Wednesday, February 6, 2008
Online at BetweenTheRopes.com

On Wednesday night, February 6, 2008, WWE Diva Ashley joined hosts Brian Fritz and Dickerman live on Between The Ropes to discuss wrestling at WrestleMania 23, the heat between Melina and herself, being on Survivor, and much more.

The interview started with some talk about WrestleMania 24 being just around the corner. Ashley said that she’s not sure what is planned for her yet. She then talked about her match with Melina at last year’s WrestleMania. “It was a big deal for me, it was a lot of fun. What was crazy is that when I got there nobody was in the arena and that was way more intimidating for me. I got there early and walked in and there was this huge stadium with 80,000 seats or whatever and I looked around and though ‘Oh my God.’ My stomach turned and I realized there are going to be people in these seats. That was the only time I felt overwhelmed.”

Ashley was then asked about working the match at WrestleMania 23 with Melina, whom she wasn’t seeing eye to eye with at the time. Ashley replied that “we’re getting along a little bit better now, but around that time we had a lot of issues. It was hard, but we’re in a professional industry and we got through it. But it happens, we’re like a family fighting, all of us, the whole locker room. We’re on the road over 300 days a year so it’s bound to happen that you’ll have these spats. It happens, you get through it, and you work. If you don’t then you won’t make it.”

Ashley then talked about her time on the show Survivor. She said that it was much different than she anticipated as she had prepared by reading over 20 books on survival.

Though, as it turned out the show was more of a game show as the contestants had to earn water and food by winning challenges instead of foraging for what the land provided. Ashley also said she knew that the editing of the show might put her in a negative light because of her previous work in television, but that she was still glad that she did it.

Next Ashley was asked about the differences between the last diva contest and when she took part in the contest. She said that she took every opportunity she had on camera to show her personality and get the fans to vote for her. She then said that it is unfortunate for the girls competing now since they don’t have as much of an opportunity to show the crowd who they are.

Regarding her giving out her real phone number during the contest Ashley said “my friends and the producers asked me if I was crazy, but I was just like ‘why not?’ People email me all the time saying ‘good luck’ so I figured why not. Luckily I had a friend that worked at the cell phone store that hooked me up with a rate so it wasn’t through the roof. It was fun, I was talking to people constantly. When I was driving or on train rides I was like ‘hey, what’s going on?’ talk to them for a few minutes and then click over. I learned from some of my favorite bands to start from the ground up and grass roots market.”

Lastly, Ashley said that the locker room is starting to feel that WrestleMania is right around the corner and everyone is beginning to gear up for it.