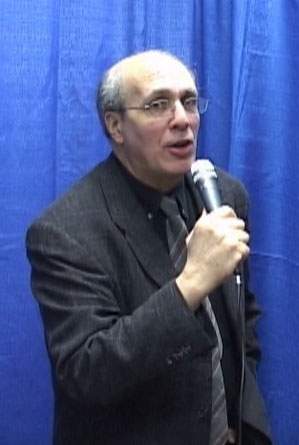 There’s nothing quite like two old friends sitting down and symbolically rolling around in the dirt.  Well, that’s exactly what Terry Funk and Bill Apter, every legendary wrestler’s old friend, have done on Kayfabe Commentaries’ latest edition of “Ringside.”  The series sits the legends of the business down before the Ringside announce table monitor, as their careers literally materialize onscreen before them.
In this edition of the series, subtitled “The Classic Years,” Funk relives his early highlights against such opponents as Abdullah, Brisco, Flair, Hogan, Race, and more.  Apter leads Funk through those years and territories, unveiling some long lost stories and perspectives from the legendary Funk.  Apter also seems the perfect foil for the dry but comical Funk.
“It’s a pleasure to be named host of the Kaybabe Commentaries RINGSIDE series,” began Apter.  “The crew at KC are highly skilled and progressive professionals and I am thrilled to be part of this ongoing project.”
The choice to turn the reigns of the show from Sean Oliver, a Kayfabe Commentaries owner and on-screen host, to Bill Apter was made by Oliver about a year ago.  “Bill’s relationship with us has been kismet from day one,” Oliver said.  “Bill Apter is the most undervalued wrestling resource in the world, and I’m not kidding when I say that.  Knowledge aside, Apter is also a showman at heart, and anyone that knows KC knows how much weight we put on entertainment value.”
Apter has seen a recent resurgence in on-camera hosting jobs and convention appearances since Kayfabe Commentaries made Apter the master of ceremonies for the popular annual RingRoasts a few years back.
“The stories that Apter and Funk share are great in this show,” Oliver said.  “Bill will have great first-hand reminiscences with all of the future Ringside guests.”
Apter also thought highly of the Funk episode. “I’ve known Terry Funk since 1971 and have travelled the roads of the world with him,” says Apter. “Through it all we became dear friends and his daughters and wife are like extended family to me (as is Terry of course). The journey we took back in time at RINGSDIE, watching so many of his matches, many of which I photographed at ringside, is a priceless memory we are thrilled to now be able share with you thanks to Kayfabe Commentaries.”
“Bill Apter at Ringside with Terry Funk” went onsale today at www.kayfabecommentaries.com.
Related Items
← Previous Story WWE Heroes #3 hits newsstands today!
Next Story → Tickets on Sale for “Ring Roasts III: Get Corny