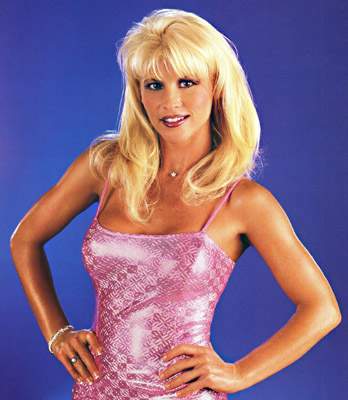 Mr. Culpepper was representing the law firm of Culpepper, Knobs & Blair. Like a good lawyer he complained anytime the KC Kid got control of the match. The Kid’s momentum came to a crashing halt when he missed a shoulder block and hit the ringpost instead. The Kid ended up on the floor and Culpepper followed using the ringpost and ring apron as a weapon on the injured shoulder. Culpepper did more damage when he hit a suplex from the ring apron for two. The Kid fought out of a chinlock only to run into a knee and he ended up back on the mat. The Kid fought to his feet again but this time he was slammed to the mat. Culpepper took too much time going to the second rope and he paid when his face met the Kid’s cowboy boot. The Kid got his mojo back with a series of right hands to the jaw of the lawyer and he went to send Culpepper packing to the office with a second rope clothesline for two. The referee was involved in a collision from a running splash and with his incapacitated; Culpepper used his trusty brief case to deliver the fatal blow.

Santee didn’t look too happy to be wrestling someone smaller than himself and let the fans know it was going to be short and sweet. Too bad Santee didn’t do research and see Knockout could wrestle with anyone in and out of his size range. Knockout used speed and leverage to take Santee to the mat and work on the left arm. That changed when Santee hit a back suplex that shook the ring. Santee let his anger loose on Knockout with legal and illegal moves. Knockout fought back with chest chops but Santee raked his eyes and choked him with a boot. Santee put all his weight on Knockout with a chinlock and then sat back with a bodylace. Somehow Knockout got to his feet and peppered Santee with punches and kicks. Santee fired back with a Samoan Drop and senton bomb for two and he got pissed at the referee for a slow count. Santee thought it was over as he set up for the Big Dump, but Knockout slid off and scored the upset win with a school boy roll.

Being former World Tag Team champions, the HBX acted like Los Ben Dejos were in their class. So Los Ben Dejos decided to attack both men, and then ride Sean Davis like a horse before doing the traditional row the boat with your opponent’s legs. Phil tagged in and he didn’t fair better with JJ or Chi Chi until JJ was double teamed by the Express. JJ had fought off Phil’s sunset flip but Sean hit a Bulldog. This allowed the HBX several minutes of sharing time, sharing the beating of JJ Cruz. JJ escaped a full nelson with a kick to Sean’s package and he tagged in Chi Chi who was ready to fight. All four ended up fighting in the ring and Los Ben Dejos won with a top rope elbow drop/Frog splash combo on Sean Davis.

Jones told the fans he was injured but he brought an equalizer in the ACW Heavyweight champion. Taurus was ready to compete and he took it to Bodhi with armdrags and headlock takeovers. Lewington & Taurus worked well as a team keeping Bodhi from Neely. Neely managed to tag in and he didn’t fair any better against the duo. The fun stopped when Neely countered a move and hit Lewington with a suplex. This allowed Bodhi and Neely time to recover as they beat on Lewington for several minutes. Lewington fought off defeat several times and after hitting Neely with a pump handle slam he tagged out to Taurus. He faired well until Neely hit him with a Spinebuster. The champion was beaten down for several minutes but kept fighting back and he was finally able to tag Lewington back in. Lewington was fired up and took on both men while Taurus recovered. When he did Taurus tagged back in and pinned Bodhi with a Michinoku Driver. After the bell Neely clipped Lewington’s knee and went to attack Taurus but Jones and his crutch made Neely retreat to safer ground.

After the fans grooved to Kong’s Sugar Hill Gang music, the chants of “Kong’s Gonna Kill” you began. Despite the reputation of Kong, Ruth went after the former World champion with no fear. But nothing she hit Kong with got her off her feet. When Kong got on the offensive Ruth slid to the floor. Kong followed and when she tried to enter the ring, Ruth was waiting with a kick to the gut. Ruth put Kong in a corner and hit a Rikishi style splash. She followed by tossing Kong’s shoulder into the ringpost and then a splash driving the shoulder into the post a second time. Kong was hit with a splash but she fired back with a spinning back fist to the face. Kong was ticked off and she hit Ruth with a bodyblock and a second rope Amazing Splash to win the match.

Marshall didn’t care that the fans cheered for Young and he punched Young in the face. That did nothing to Young who slammed and then Bealed Marshall across the ring. Young followed with a standing suplex for two. Young was ready for a splash but Marshall pulled the referee in front so Young stopped. This allowed Marshall to hit a cheap shot and take over on Young. Young fought back but his shoulder block met the ring post. Marshall went on the attack working on the neck and shoulder. Young fought back and both men ended up trading punches in the ring. Young hit two back suplexes and followed with a corner move only to hit Marshall’s boot. Marshall went for a shoulder block but got scooped up by Young into a slam followed by a Spear for the win. After the bell the dreaded Navy Seal came from the crowd and jumped Young. Seal then handcuffed Young to the ropes. Jerrelle Clark came out and saved Young from a belt whipping.

This match actually began as a single match but Spears got frustrated at Carter’s helping Cabana punk him and his inability to defeat Cabana. So Spears said he had a special person who could help him out. That turned out to be Shooter Storm in drag, being called Shooterella who Spears had to drag from the locker room. Words cannot describe Shooterella, only the hundreds in attendance who took photos can do that. Spears let Shooter in the ring so Cabana brought in Carter. Shooter went to run the ropes with Carter, instead he rand them and got bitch slapped. Spears got caught on the ropes and had Storm’s crotch ran into his face. Spears’ face was bright red and he couldn’t do anything as Cabana kept on the attack. That was until Cabana was reversed and he ran into Carter sending her crashing to the floor. Cabana went to check on Carter and this allowed Spears to sneak up and drive him into the ring post. Storm gave Spears a rest and faired decent against Cabana. Spears came back in and hit a Superkick for two. Storm went up top and missed the Rocket Launcher. Cabana drove Storm into Spears which dropped Spears on the floor. Cabana went to work on Storm as Spears got back in only to have Storm’s head driven into his crotch. Cabana went for the Boom in the corner but Spears pulled the referee in the way. With Cabana on the floor Spears and Storm had total control of Carter who begged for Spears to leave her alone. Storm was dragged to the floor by Cabana as Carter hit Spears below the belt. Spears was hit with a clothesline to the floor as Carter tossed Storm in the ring. Storm was all alone as Cabana stripped him of the drag outfit and Carter hit a shoulder block to score the win.