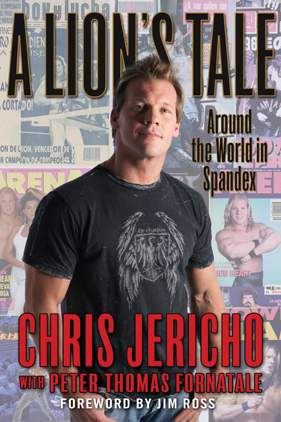 “…brash, funny, compulsively readable prose…A born storyteller, he understands that losers are funnier than winners, struggle is more compelling than success and a happy ending is all the sweeter after a miserable beginning…Low-down, funny and as bracing as a body slam.”
– Kirkus

“What I liked best about the book is that it came across as a sincere and honest account of Jericho’s life…with no pretense.”
â”€ Kevin Eck, Ring Posts blog, Baltimore Sun

“If you want to be a wrestler, you have to be prepared to live everyday in pain”

That was the advice bestowed on an aspiring young wrestler by the seasoned athlete and future politician, Jesse Ventura. Chris Irvine, the soon-to-be phenomenon known as Chris Jericho and “Lion Heart,” listened with open ears and a spirit of eagerness. Did Chris know what lay ahead of him? As a child watching wrestling with his grandmother in their Winnipeg basement, he had no idea. A LION’S TALE: AROUND THE WORLD IN SPANDEX (Grand Central Publishing Hardcover / October 25, 2007 / $25.99) charts the journey of a kid from Canada with a dream and the determination to see it come true. Chris begins at the Hart Brothers Pro Wrestling Camp and goes on to endure years of struggle and hard work as a wrestling star in Mexico and a wrestling villain in Japan. Jericho then ascends to the World Wrestling Entertainment as the first undisputed heavyweight champion and, ultimately, creates a niche for himself in the internationally renowned World Wrestling Federation.

This is Chris’s memoir of revelation, discovery, and ultimately, inspiration, from finding out what his destiny is to being paid for the first time for what he loves to do, to realizing why, exactly, he encourages everyone to pursue their dreams. Funny, heart-warming, and steadfastly candid, A LION’S TALE is a story of seemingly random personal tragedies, life-changing joys, and even the rock music adventures and endeavors that punctuate Jericho’s journey to professional wrestling victory. But it also celebrates the many unsung players as well as the famed heroes of the wrestling industry who help shape Chris as an athlete and a man, including the late Chris Benoit who was both a friend and a surrogate brother to Jericho.

A LION’S TALE might be deemed the tell-all response to the question, “How did you become a wrestler and survive the ensuing trials and tribulations and the tests of physical stamina, mental endurance, and emotional strength?” Part of the answer is that Chris retained his integrity throughout his career, from fledgling mat novice to well-paid expert wrestler, never allowing himself-no matter what the proposed reward-to be turned into a “moneymaking merchandising machine.” A sportsman before a commercial star, Jericho refused to allow his fascination with that ever-present seducer, fame, to overcome his desire to honor the art of wrestling, even if it is, in many ways, an art of fantasy and disguise.

In a survival-of-the-fittest world of “grapevines,” “Frankensteiners” and “head scissors” and unforgettable wrestling personalities from the “Great Goliath” to “Rio Lord of the Jungle” Rick Williams, Chris Jericho keeps alive one basic principle which readers can easily pick up on and integrate into their own lives, be they aspiring doctors or disc jockeys: never quit, because quitting wasn’t an option for Chris.

###
ABOUT THE AUTHOR
Chris Jericho has regularly appeared with World Wrestling Entertainment (WWE), World Championships Wrestling (WCW), and Extreme Championship Wrestling (ECW). In addition to his title as the first-ever WWE Undisputed Champion, Jericho is a seven-time WWE International Champion. He is a regular contributor to VH1’s “Best Week Ever” series, the host of the syndicated radio show “The Rock of Jericho,” and was recently a contestant on Fox’s “Celebrity Duets.” He splits his time between Florida and California.