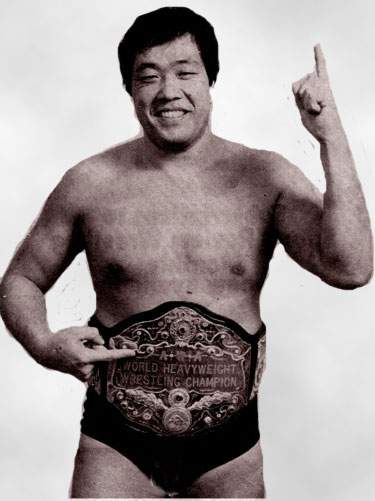 My First Student of Professional Wrestling
By Dory Funk Jr.

Jumbo Tsuruta is the only wrestler ever outside the family to master the spinning toe hold, and is the only one who can throw the same fore arm smash every bit as hard as I do. His moves were so perfect that we did a special slow motion production of his three best suplexes, belly to belly, German suplex, and double arm suplex to use as an open for the television show in the Amarillo Territory.

Jumbo Tsuruta was sent to Amarillo by All Japan Pro-Wrestling President Giant Baba to train for professional wrestling. Jumbo was my first student. Even though his time in Amarillo was short, Tsuruta made many friends who never forgot his kindness.. He learned everything by just doing it. He told me his English was not so good and he really didn’t want to do interviews. I told him, you must do interviews, you are going to be interviewed and the announcer is going to ask you about your opponent, “You must say something.”

Tsuruta’s interview went like this. “I know my opponent has a good heart, and I have a good heart too. I am going to do my best.”  Jumbo was wrestling our top heel Sputnik Monroe who had just said, “I will punch his lights out. I will whup that puke just like eatin’ boardin’ house pie.” I don’t know what boardin’ house pie is, but Sputnik was always going to whup somebody that way.

People in Amarillo loved Tsuruta for his sincerity, athletic ability, and kindness. He didn’t have a bad word to say about anybody and his skills in the ring were unmatched. In his first year in professional wrestling, Tsuruta became a top star in the United States, something accomplished by only a few Japanese wrestlers including Giant Baba and the current President of All Japan Pro Wrestling, Great Muta.

*** “C’mon Junior let’s go, we got 17,000 people waiting for us out there and millions of Japanese wrestling fans watching their TV at home, c’mon let’s go!!” We were in Japan and it was time for Terry and I to go to the ring to face my Boss, Giant Baba and my first student in professional wrestling, Jumbo Tsuruta. The complete match is now online at http://www.dory-funk.com –

The next !BANG! TV Taping comes to Funking Conservatory Wrestling Saturday July 30th, Support Your Troops 68, Blood Sweat and Tears. For ticket information, call 352-895-4658. If you would like to become a professional wrestler and appear weekly on !BANG! TV and Premium !BANG! TV, Call now 352-895-4658 or visit http://www.dory-funk.com    Dory Funk Jr. is the Coach of Funking Conservatory Wrestling and Trainer of WWE, TNA, NXT and Japanese wrestling talent.