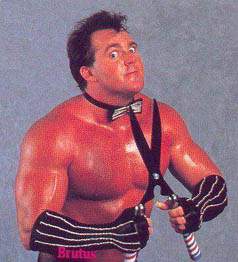 Brutus Beefcake appeared last night on the season premier of Sunset Flip Wrestling Show, which is hosted by Tommy Fierro and Jim Boy Star. Fierro wasted no time and went right into asking about Hulk Hogan‘s new Celebrity Championship Wrestling project. Beefcake listed a bunch of the celebrities that were a part of the show and talked about how he and Brian Knobbs are doing the training for it. He said the celebrities are broke into two groups of five for the show.

Fierro then asked him about his reaction to how the media is making a big deal out of Hulk Hogan and his family lately. Beefcake says Hogan is like the Pope, everyone in the world knows who he is. He says Hogan sells magazines and tabloids. He says it’s funny how you never hear about all of the good things that Hogan does for people, including children and charities. He says you only hear the bad or negative things. He says Hogan will come out of this just fine and he will become a better person because of it. He says he thinks Linda is making a fool out of herself.

Fierro then asked Beefcake about how much it would mean to him to one day be inducted into the WWE Hall of Fame. Beefcake says he doesn’t dwell on it and how he’s already been inducted into ten other hall of fames already. He says he’s happy with his career. Fierro jumped in and put Beefcake over saying how he was one of the top two or three babyfaces for the company in its hay day and how he doesn’t get the credit that he deserves for the money he drawed. Beefcake says he has no hard feelings towards any of the McMahons and how it was an honor to work there for ten years. He said who knows maybe one day he will be.

Beefcake says he’s 225 pounds and 8 percent body fat right now and is in the best shape of his life.

Beefcake talks about how he was backstage with Hogan for the Raw 15th Anniversary show but they didn’t use him.

Beefcake talks about how he thinks WWE is struggling a little bit. He says they have gotten away from that family-friendly product and he think it’s hurting them. He says you have to find a balance between old and new.

He says he doesn’t get to watch the current product due to his family and schedule but says he’s friends with a lot of the guys on the main roster including Undertaker, Big Show, Chavo Guerrero, and Triple H.

He thinks fans get tired of watching the same people over and over again.

To listen to the entire interview, head over to: SunsetFlipShow.com

Greg “The Hammer” Valentine will be appearing on the next edition of Sunset Flip Wrestling Show, which airs every Sunday night at SunsetFlipShow.com