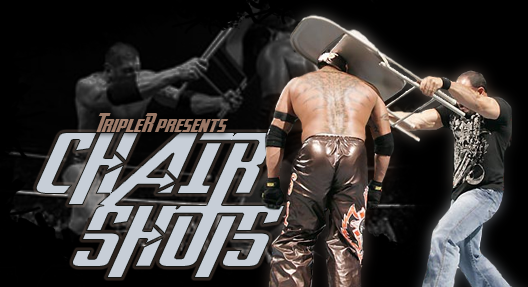 Editor’s note: This column originally appeared on LordsofPain.net and was written by columnist TripleR.

Welcome back everybody to the column that DIDN’T have a season-ending injury in NFL Training Camp- Chair Shots! Now I’m back from vacation, rested and tanned after a few days at the beach, but I did manage to catch a little bit of Monday Night Raw last week. It was a pretty decent show, with Daniel Bryan getting about 40 minutes of wrestling time, but that’s not what I want to talk about today. What I want to talk about is a topic that’s probably going to split a lot of my readers down the middle. So follow the bouncing ball as I tell you of my jubilation, which was followed week after week with utter indifference.

Let me take you back to April 2, 2012 to the Raw immediately following Wrestlemania. The WWE was at on a high following their yearly PPV extravaganza, and nobody knew what to expect on this evening. Then HE showed up. After eight years away from the WWE, Brock Lesnar returned to a deafening roar, F-5’ing John Cena into oblivion to the cheers of almost everybody in attendance. On that night, at that particular moment, the WWE had their universe, which I am a part of, in the palm of their hands.

And then I stopped caring.

Since his return over a year ago, Brock Lesnar has wrestled a total of 4 matches for the WWE, with a 2-2 record. 3 of the four matches have been against the same person, Triple H, in a feud that basically came down to who was the bigger bully. So now, as we travel the road to Summer Slam, Brock Lesnar is back in the picture, involved in a feud with CM Punk. But is he really? Since his first attack on Punk, this feud has almost nothing to do with CM Punk vs. Brock Lesnar. Instead, the feud is CM Punk vs. Paul Heyman, a man that stabbed his best friend in the back and cost his the Money in the Bank briefcase. So why should I care about Brock Lesnar being the person to go against Punk at Summer Slam. In essence, that role could have been taken by just about anybody. Heyman could have enlisted the returning Rob Van Dam, who also seems to have been brought back for no particular reason, or used his latest protégé Curtis Axel in the same role.

From the WWE’s perspective, the idea of a Brock Lesnar vs. CM Punk match will draw on just the name alone, which is more than likely correct, but that doesn’t excuse the fact that this match has absolutely nothing to do with Punk vs. Lesnar, as they’ve had very little interaction up to this point. With the 7/29/13 Monday Night Raw being a taped event, we already know (SPOILER) that they have no interaction this week either. So that leaves you with just two weeks to have Punk and Lesnar interact prior to their match on August 18th. A man with Brock Lesnar’s reputation should be more than just a tool for Paul Heyman. He should be front and center in Punk’s face week after week after week. But that can’t happen, and the WWE has no one to blame but themselves for that.

Signing Lesnar to such a lucrative contract for such a limited amount of dates has tied their hands in terms of what they can do with him. After his return last year, he was immediately thrust into a feud with John Cena which saw a good number of his appearances used for a one-match encounter that saw Cena defeat Lesnar after barely doing anything the entire match. Because of this, Lesnar continued to disappear for large portions of time on WWE television, including his feud with Triple H, which lasted over 8 months.

It’s completely understandable that the WWE Universe would lose interest in Brock Lesnar after such stop/start/stop booking. He’s also not been booked to be the dominating force that everyone expected him to be. That really hasn’t changed in this (sort of) feud with CM Punk. While the main premise of the feud is Punk’s traitorous ex-best friend, when Punk and Lesnar interacted, the much smaller opponent showed absolutely no fear in the face of a man that broke Triple H’s arm twice. He basically looked him dead in the eyes and told him he could care less about Brock’s reputation. Yes, Brock proceeded to deliver a beat down to CM Punk, which culminated in an F-5 on the announce table, but Punk got up, and came back out the following week saying the same thing.