GUEST COLUMN: “Examining the Pros and Cons of the Wyatt Family’s Debut” by Seth Guttenplan 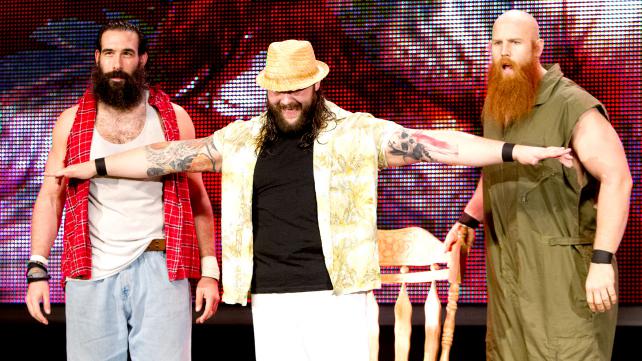 On the July 8 edition of WWE Raw, Bray Wyatt and the Wyatt Family finally made their anticipated debut after weeks of vignettes and hype. Prior to being seen at ringside, videos were shown throughout Raw of a reporter visiting the Wyatt Family to learn more about them. The final video ended in a transition that began the debut.

Here is a look at the pros and cons of the Wyatt Family’s debut.

As mentioned above, the Wyatt Family’s entrance came as a transition to their final video. This made their entrance into the arena fun to watch, and it was a great way to introduce them. WWE produces spectacular video packages as seen on all programming, but even more so on WWE Main Event.

The choice to have Luke Harper and Erick Rowan attack Kane of all Superstars resulted in a quality choice. Kane is a seasoned veteran and by all accounts a monster.

How can you make a new group look dominant? Take out a monster, of course.

Kane is also one of the seven participants in the WWE title Money in the Bank ladder match. The Wyatt Family’s attack on the Big Red Monster raises the question as to whether or not Kane will be able to compete in six days at Money in the Bank.

Let’s also give WWE credit for not giving the Wyatt Family the Brodus Clay treatment.

For those who don’t remember, WWE produced a number of vignettes leading up to Clay’s debut after his season with NXT ended.

Luckily, the Wyatt Family’s gimmick was kept intact since it is unique in today’s age. It will be interesting to see where it goes from here.

After their attack on Kane, the Wyatt Family merely left. (photo courtesy of wwe.com)

The Wyatt Family’s debut was entertaining, but it didn’t last very long. After Rowan and Harper finished their beating of Kane, Wyatt kneeled before Kane and looked up to the sky with his so-called brothers. The segment ended without any in-ring promo or anything else.

As Wyatt kneeled, the crowd began a familiar chant to the man who portrays the leader of the Wyatt Family. Husky Harris chants were heard from the Baltimore crowd.

Wyatt has done a tremendous job as his new character. The crowd is essentially ruining the environment and aura in the segment with these chants. The WWE Universe chanted Albert constantly when Tensai debuted, and it hurts the character.

The Wyatt Family’s debut was exciting, but it didn’t have much of an impact right away. When The Shield debuted at Survivor Series, they did so during the WWE title match when they took out Ryback.

Understandably, The Shield’s debut was also better because no one expected it. Regardless, the Wyatt Family’s debut could have been done during a more prominent situation. Kane vs. Christian had very little meaning. Yes, they are both in the same Money in the Bank ladder match, but neither one is likely to win.

The Wyatt Family’s debut should be the start of a great run for Wyatt, Rowan and Harper. They made a name for themselves and their group in NXT. Now, they get to do the same on the main roster.

Hopefully, they continue to dominate early on to compete with The Shield as the best current faction in the WWE. The Wyatt Family’s debut could have been done without actually letting the WWE Universe know what day it was going to happen.

Regardless, there are always pros and cons to WWE Superstars’ debut, and hopefully, you enjoyed reading about them.