Home / Columns / GUEST COLUMN: “Ryback to Cryback – Will he ever be the monster WWE wants him to be?” by Marc Yeager

GUEST COLUMN: “Ryback to Cryback – Will he ever be the monster WWE wants him to be?” by Marc Yeager 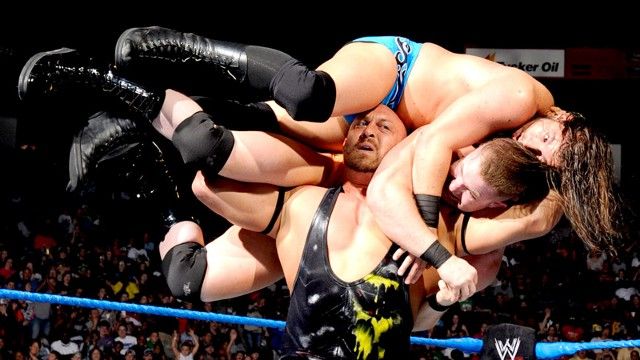 On RAW we saw the continuation of the feud between Chris Jericho and Ryback through a match Ryback had against Miz where at the match’s conclusion Ryback took a Codebreaker from Jericho. It was very simple stuff that furthered the hype for their match at Money in The Bank. Once that match ended, it left a bad taste in the mouth of some fans and even worse, it could’ve soured some fans towards Ryback permanently. It’s not as if Ryback critics didn’t exist before this all happened, but now they have another reason to state that he just won’t do as the top monster in WWE.

Let’s start with what he did last Monday; he did something I’ve never seen someone playing the “monster” character do when he quit a match. Now I don’t know about you but when I see someone who has been built up as an unstoppable monster quit a match against a guy like Miz it takes a lot away from him. Now, I mean no offense to Miz as I’m a Miz fan but there’s no reason Ryback should lose to a mid-carder with no sense of character direction, let alone by forfeiture. Can you picture Mark Henry giving up a match halfway through for whatever reason? When someone quits on their team in other sports, nobody looks at them as a leader. For example, a few years back Chicago Bears QB Jay Cutler was accused of giving up on his team in the playoffs, and nobody has really fully trusted him since. What I’m trying to say is if Ryback quits a match now, will he quit again?