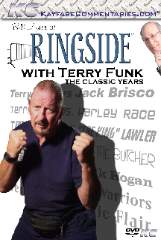 I’ve been fortunate enough to acquire and review all but two of the DVD’s produced by Sean Oliver’s team, and their track record has been absolutely remarkable. The premise of the “Ringside” DVD has moderator Bill Apter (officially taking over for Oliver) sitting down with long-time friend and legendary wrestler Terry Funk to watch some of his most famous matches. As I’ve said in previous Ringside DVD reviews, there is one obvious problem with this concept – they cannot show copyrighted video footage. So viewers get to look at the backside of a TV monitor while Funk & Apter watch and analyze the action on the screen. Fortunately, it was more about the shoot interview than it was about the footage they were supposed to be discussing. I thought Sean Oliver was a great moderator and I had no complaints about him hosting these DVD’s, but Mr. Apter is a legend in the business and his experience and insight will be a very valuable asset to future Kayfabe Commentaries releases. Apter comes up with questions that nobody, not even loyal YouShoot contributors, would think to ask. OWW Hall of Famer Terry Funk is a gracious subject and answers everything to the best of his abilities. To me, he is every wrestling fan’s grandfather. I’m sure this gig was a hell of a lot easier than getting grilled at the second annual Ring Roast (available on DVD at Kayfabecommentaries.com). A lot of the matches they were talking about can be found on YouTube, so you may find it helpful to log onto that site while you’re watching this DVD.

If you’re not a fan of Kayfabe Commentaries, then become one now and head over to their website at www.KayfabeCommentaries.com and pick out a couple of amazing DVD’s from their growing collection.

Kayfabe Commentaries honored him as their last Ring Roast victim, now “the Living Legend” Terry Funk joins the Ringside series with new host the legendary Bill Apter (recently interviewed on Online World of Wrestling Radio) who replaces Sean Oliver. Funk & Apter have been friends since 1969 and you can tell by their chemistry. Here is the full listing of the matches:

Mr. Funk is the perfect guest for this show having been NWA World champion and wrestled in several decades. He has forgotten more about the sport then many of will ever know. Like the previous releases with Big Van Vader and Demolition, due to someone else owning every piece of wrestling footage ever shot; the DVD is a sit down interview with a TV monitor in front of Funk & Apter. Funk was born into the sport (Dory Sr. & Jr.) and his love for it resonates throughout the program as does Apter’s. Funk gives interesting insight into the responsibilities of the National Wrestling Alliance World Heavyweight champion and being married to the belt. Funk was also the American booker for the Japanese promotions and he gives stories of dealing with promoters like Giant Baba and the talent. Another amazing thing is Funk’s great recollection of stories from his career that some of his generation would never remember. He can remember a 64 consecutive day run in WWF in the 80’s, meetings with Vince McMahon Sr. & Jr., the Japanese promotional wars, dealing with the Puerto Rico promotions and creating the “Empty Arena” and “I Quit” angles. This DVD is just the cusp of the historical matches Funk has been part of and I hope it makes you seek out other DVD’s and material.

The next 3 scheduled releases from www.kayfabecommentaries.com are all from the YouShoot series: former WWE diva Maria Kanellis, TNA President Dixie Carter in a live format and Jim Cornette returns with the “lost questions.”