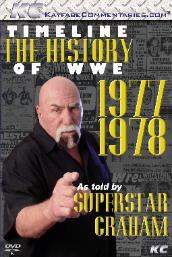 Kayfabe Commentaries director Sean Oliver began the DVD, as he begins every Timeline DVD, by describing the state of the world in 1977 (pop culture, price of gas, etc.) to set the stage for the legendary Superstar Billy Graham to walk down memory lane and relive the years 1977 and 1978, when the Superstar was one of the biggest wrestling draws on the planet.

The interview starts out heavy with the shocking revelation that Bruno Sammartino wore a hairpiece for a brief time in the late 70’s! Graham also talked about his desire to eventually turn babyface and sell t-shirts to the fans, but Vince McMahon Sr. told him he was not into marketing. These two crazy stories were told in the first five minutes of this DVD! I’ve never heard Superstar Graham open up like this ever before.

Graham went on to talk about the power structure in the WWWF in 1977, calling them “old school people.” He also told an unbelievable story about his troubles in getting two free tickets from Arnold Skaaland for a show at Madison Square Garden where he sold out the building as 1/2 of the main event. Graham got emotional telling a road story about the recently deceased Baron Mikel Scicluna. There was lots of talk about Vince Sr., Vince Jr., Bruno Sammartino, Stan Stasiak, Bob Backlund, Gary Michael Cappetta, Dick The Bruiser, Billy Robinson, Jos Leduc, the Brisco brothers, Haystacks Calhoun, Tony Garea, Joe Scarpa (Chief Jay Strongbow), Pedro Morales, Ivan Putski, Lou Albano, Harley Race, Chavo Guerrero Sr., and a whole lot more.

Graham offered details about the classic match on April 30th where he “cheated like hell” to defeat Sammartino for the WWWF championship. Another shocking story involved Graham pitching an idea to Bruno to screw Vince Sr. out of having Graham drop the belt to Bob Backlund. There are so many amazing stories included on this shoot DVD. You will really enjoy listening to Superstar Billy Graham talk about the WWWF circa 1977-78!

Check out www.kayfabecommentaries.com for more information on the “Timeline” series, as well as the other great DVD’s in the Kayfabe Commentaries library. You won’t be disappointed!

Timeline – History of the WWE 1977-78
As told by SUPERSTAR BILLY GRAHAM
Available at www.KayfabeCommentaries.com
Reviewed By: Alan Wojcik

Last DVD review I made the comment that after producing and releasing YouShoot with Jim Cornette that Kayfabe Commentaries had possibly jumped the shark. Well I have inserted my size 13 in my mouth with the release of their latest issue in the TIMELINE: HISTORY OF THE WWE. This time out Sean Oliver and his staff conquer 1977-1978. Well not all of 1978 but we’ll get to that in a moment. Who better to have as a guest for the DVD than one of the most influential and imitated wrestlers in history “Superstar” Billy Graham.

We find out when 1977 began Graham was working for another wrestling legend, Championship Wrestling from Florida promoter Eddie Graham. The biggest shock Graham reveals is how one phone call from Vince McMahon Sr. changed wrestling. When Graham agreed to work for the World Wide Wrestling Federation he knew the exact date he would win and lose the championship. In 1977 WWWF was in the 11th year of Bruno Sammartino as champion. Graham was told by McMahon that Sammartino was burned out and wanted to take a break. They needed someone to hold the belt until a newcomer named Bob Backlund would win the title in 1978; we’ll get to him in a moment too.

If you have purchased the previous History of DVD’s you will like the update in on-screen graphics. The 1987 release with Honky Tonk Man was the year of WrestleMania 3. The 1983 release with Magnificent Muraco was the time just before Hulkamania began in WWF. In 1977 WWWF was like any other territory, with predetermined borders Vince McMahon Sr. and his rivals would not cross (Graham and Oliver say the territory stopped around the Richmond VA area.) WWWF held TV tapings every three weeks in time of no PPV or digital cable TV. Like many who worked for “Senior” as he is referred by his workers, Graham had respect for Vince McMahon. Graham walks you through the process of payout by McMahon’s staff and when I say staff I mean 2 or 3 people. Stars of the 70’s like Tony Garea, Rene Goulet, Pat Patterson and “Chief” Jay Strongbrow were partners and opponents of Graham eventually became producers/road agents of the 1980-1990’s WWF. “Superstar” also reminisces on past legends like “Baron” Mikel Scicluna (which brings Graham to tears), his WWWF manager the Grand Wizard, Harley Race, Sam Mushnick, Rocky Johnson, “Captain” Lou Albano, Pedro Morales, Stan “the Man” Stasiak, Mil Mascaras, “High Chief” Peter Maivia, Dominic DeNucci and more.

I mentioned the DVD doesn’t cover all of 1978 and it’s true. But it doesn’t hurt the product by ending it after Graham dropped the championship to Backlund in Madison Square Garden. He does stick around to talk about the WWWF in the weeks after the switch and that one story is worth watching this DVD. I consider myself a wrestling history mark and I would have purchased this DVD a part of my master’s in wrestling history.

Next on the review list according to www.kayfabecommentaries.com : Bill Apter at Ringside with Terry Funk and YouShoot with former WWE Diva Maria Kanellis.

Alan J. Wojcik is the host of OWW Radio (www.owwradio.com), but can also be reached through his website at http://alanwojcik.com

Timeline – History of the WWE 1977-78
As told by SUPERSTAR BILLY GRAHAM
Available at www.KayfabeCommentaries.com
Reviewed By: “Wild” Bill Brown

There now have been thousands of videos distributed out in the wrestling marketplace that have been titled in one form or another as “Shoot Interviews.” If these particular interviews aren’t branded with the word “shoot,” there still have been plenty of other versions with a particular subject chosen to speak to the camera for the wrestling audience. But the crew over at Kayfabe Commentaries by far has come up with the most unique concepts with their chosen personalities, and once again, we are given another segment of “TimeLine” with former WWWF Heavyweight Champion “Superstar” Billy Graham. Billy was a charismatic pioneer, who was inadvertently paving the way far into the future with his style & confidence that made Vincent J. McMahon, then president of the World Wide Wrestling Federation, hand select him as the flag bearer for his company in 1977. With a long researched plan formulated, Billy Graham will guide you through the days, months, & years from almost anything that stuck out in history that Sean Oliver will throw at him to answer. This is without a doubt the most timelined interview compiled from Kayfabe Commentaries that has ever been produced, with so much research & data going through, and a great guest that lived through it all that you will definitely feel as if you are involved very deeply within the wrestling world of the past, with the WWE Hall of Famer right by your side telling you about his rise & fall in this incredible journey.

Every question is displayed on the video screen prior to the answers from Billy Graham. Many footnotes are included, and video crawls will support said facts throughout the shoot. The video quality & clarity is top notch as usual, and the feeling of watching this production from Kayfabe Commentaries makes any audience watching have the gripping feeling of being in the story the entire time. This is a perfect flow right on subject throughout the entire presentation.

What’s On The DVD’s?

Sean Oliver & his staff prepare the most unbelievable research of data for Billy to comment about throughout the DVD. We are guided through the time era of the country & how the wrestling world fit into it. You will understand the working relationships between the wrestling promoters, their territories, & the agreements they made towards future planning, and in this case, being Billy Graham chosen from Florida & Eddie Graham selected as the man to defeat Bruno Sammartino. Billy will tell you about his debut on WWWF television, being paired up with The Grand Wizard of Wrestling, and how he continued to work Florida & St. Louis territories, building up to his WWWF Title victory. Once getting the strap, you will be provided a continuous lineage of timeline dates, and Billy will take you through all of them, such as the first meeting with Bob Backlund in St. Louis, blading up his finger good in a match with well-known shooter Billy Robinson, dropping the Florida Tag Titles while WWWF Champion, as well as matches & feuds with the challengers throughout his reign with the belt. Billy will also talk about the rare unification battle with NWA World Heavyweight Champion Harley Race as his time winded down as WWWF Champion. And would “Superstar” Graham & Bruno Sammartino possibly double cross future champion Bob Backlund out of his championship title victory a night prior to the long-planned title change on February 20, 1978? Billy Graham will let you know all about it.

There is so much here to even try discussing. Two hours of your time is about to fly by once you pop in a DVD of Kayfabe Commentaries’ “Timeline: The History of WWE 1977/78 As told by Superstar Graham.” One of the better DVD’s out there thus far, Billy Graham tells all.

Sean Oliver & Kayfabe Commentaries provide the most well thought-out & researched interviews out there. Some interview companies might tap a wrestler on the shoulder in a hotel lobby on a night that some of the boys are in town, and hand them X amount of dollars to talk to a video camera for a few hours, but Kayfabe Commentaries no doubt plans out every detail with their subjects to provide the viewers with the best possible, fully researched wrestling interviews that are second to none in this business.