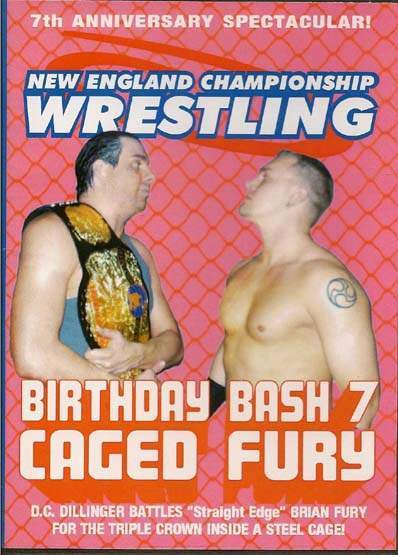 HIGHLIGHTS FROM NECW.TV
“Straight Edge” Brian Fury vs. “Die Hard” Eddie Edwards: Brian Fury was fighting for an opportunity to challenge for D.C. Dillinger’s Triple Crown. Not even interference from the Triple Crown champion and “Manager of Champions” Sean Gorman could break Fury’s heart and determination on his way to achieving his dream of winning NECW’s Triple Crown. It was later ruled that interference would not be a factor in the future title match because it would take place inside of a “15-foot” high steel cage. Which brings us to tonight’s card……

TAG TEAM GRUDGE MATCH
DNA (T.J. Richter & Max Bauer, w/Sensational Scott Reed) vs. The Arion Brothers (Frankie Arion & Alex Arion): Alex Arion defeated all three members of DNA the previous month to get his brother, Frankie, reinstated as a wrestler in NECW. I’m not sure if the Arion’s are real life brothers but they sure as hell don’t look like siblings. They managed to work very well together and scored the victory to cement their reunion. The crowd respectfully welcomed Frankie back into the NECW fold, as T.J. Richter threw a fit in the ring and extracted himself from DNA to set out on his own.

BACKSTAGE INTERVIEW
Chris Norman & Handsome Johnny + WWE champion Lexxus: Handsome Johnny cut a heel promo, promising to “cash in his thoughts” and issue a challenge to one of the champions of NECW. Johnny then approached the extremely cute WWW (Women’s) champion Lexxus and suggested they go on a date after the show. Lexxus declined the offer, but Johnny told her to “call me” anyway.

WWE WOMEN’S TITLE MATCH
Lexxus (champion) vs. Tanya Lee (challenger): Both of these competitors could be poster-girls for the theory of not judging a book by its cover. Each stands about five feet tall, weighing around a hundred pounds, but don’t be fooled into thinking they are just a couple of flakes. That was the mistake I made last year when I experienced these two fire-crackers for the first time. Tanya Lee, who was without her manager Sean Gorman, is not used to being the challenger, having lost the WWW title to Lexxus six days earlier after a long eight month reign as champion. Highlights of that match (Lee vs. Lexxus vs. Jana vs. Natalia) are included in the Extras section of the DVD. For their Birthday Bash 7 rematch, Lexxus successfully retained her WWW title with a convincing victory over the unusually tame Tanya Lee.

NECW TELEVISION MATCH
Brandon Locke (champion) vs. Eddie Edwards (challenger): The two-time Iron 8 champion, “Die Hard” Eddie Edwards, was attempting to add some more hardware to his trophy shelf as he challenged Brandon Locke for the NECW Television title. Both men started the match with a great deal of caution, as the bout escalated into a game of human chess. There was a very old school feel to this contest. It probably helped that Edwards was out there without his devilish manager, Sean Gorman, who was pre-occupied backstage helping D.C. Dillinger prepare for his cage match later. For a few brief moments, Edwards got desperate and resorted to some dirty tactics, but settled back into a classic wrestling match for the remainder of the battle. I guess “Die Hard” Eddie should go back to being a rule-breaker because obeying the rules caused him to come up short in his pursuit. Brandon Locke retains his NECW Television title in a match which will surely be featured on the Best of 2007 DVD (coming soon).

IN THE RING
Brandon Lock & Handsome Johnny: Handsome Johhny entered the ring and praised both men for wrestling “one hell of a match.” Johnny said he was coming back to NECW for championship gold, and challenged Brandon Locke put his TV title on the light right here right now. Locke wisely refused, having just survived in a grueling match with one of New England’s toughest wrestlers. Johnny proceeded to call Brandon a sissy until Locke snapped and beat up the Handsome one and left him laying in the middle of the ring!

ANYTHING GOES FALLS COUNT ANYWHERE MATCH
Big Rick Fuller vs. Evan Siks: Big Rick Fuller is one of the true giants of independent wrestling. I find it so hilarious when NECW announcer Sheldon Goldberg refers to Rick Fuller as a “former World Championship Wrestling star.” Sure he had a cup of tea with WCW but he could hardly be classified as being a “star.” My only memory of him in WCW is getting Torture Racked by Lex Luger. Although it IS quite an accomplishment to have worked for a company as big as WCW. Anyway. This war of the heavyweights ended with “The Human Nightmare” Evan Siks scoring a quick roll-up out of the blue for the victory. Fuller immediately assaulted the referee for committing what he considered a travesty of justice!

INTERVIEW
Chris Norman & Evan Siks + Michael Sane: Chris Norman approached Evan Siks to ask him what plans he had in his future. The psychotic Michael Sane jumped out of a box that was supposed to be a birthday present for NECW fans. Sane, whose middle name most likely starts with “N,” destroyed Evan Siks and snapped Siks’ neck before proclaiming “I’M BACK!” – This Michael Sane guy is one of the most convincing psychopathic characters I’ve ever seen on an independent show.

BALLROOM BLITZ (INTERGENDER) GRUDGE MATCH
Sean Gorman (tuxedo) vs. Nikki Roxx (evening gown): Nikki Roxx, known to TNA fans as Roxxi Laveaux, was catapulted to independent stardom during her long stint in NECW. One of Roxx’s final acts as unofficial queen of NECW, was to teach the irritating manager of champions, Sean Gorman, a lesson in this Ballroom Blitz – a combination Tuxedo/Evening Gown match. Announcer Sheldon Goldberg remarked “this looks like the top of a wedding cake gone wrong.” Nikki looked almost too good in her beautiful purple evening gown. Sean Gorman said he had nothing to prove, and tried to walk out of the match. Lexxus (mmmmm Lexxus) prevented Gorman from escaping, and tossed him back into the ring to deal with his fate – getting beat up by a girl. There’s no shame in getting beat up by Nikki Roxx; in fact, show me the sign-up sheet and I’ll put my name down. Lexxus acted as a one-woman Lumberjack, pushing Gorman back into the ring every time he tried to escape. Is it wrong that I found myself cheering for Sean Gorman, whose objective was to rip the evening gown from Roxx’s spicy hot body? My prayers went unanswered, as Roxx managed to rip the tuxedo piece by piece off of Gorman’s scrawny body – handing him the ultimate humiliation in front of the NECW fans.

NECW TRIPLE CROWN STEEL CAGE MATCH
D.C. Dillinger vs. “Straight Edge” Brian Fury: As usual, the term “15 foot high steel cage” is just an expression, as thing cage was no more than seven feet above the ring’s surface, plus two feet above the floor – unless D.C. Dillinger is 13 feet tall. The steel cage was used to prevent any of Sean Gorman’s troops from interfering, but that didn’t stop “Die Hard” Eddie Edwards from trying. NECW President Shelton Goldberg took care of Edwards and then slammed the cage door on Dillinger’s face after he got mouthy with Goldberg. Both men were bloodied by the end of the match, which saw Brian Fury do a spectacular Superfly Splash off the top of the cage onto D.C. Dillinger and scored the pinfall to become the new NECW Triple Crown champion!

BONUS MATERIAL: There is lots of extra material included on this DVD like post-match interviews with Brian Fury and an extremely irate D.C. Dillinger. Plus highlights from the fourway match where Lexxus captured the WWW championship, the contract signing between Dillinger & Fury, and finally a promo by “Manager of Champions” Sean Gorman hyping the Ballroom Blitz match. All of this stuff happened before the event so I highly recommend watching the Extras BEFORE you watch the actual event. Another kick-ass DVD from New England’s most respected wrestling promotion.

You can watch exclusive episodes of NECW Television at NECW.TV or you can check out the large selection of popular New England Championship Wrestling and World Women’s Wrestling home release DVDs at www.necwwrestling.com & www.worldwomenswrestling.com.