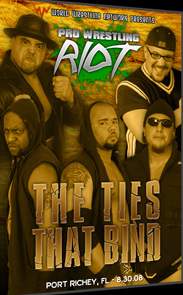 IN THE RING
Ron Niemi & 911 Inc.: Ron Niemi came out with his 911 Inc. crew including Jon Davis, Kory Chavis, Francisco Ciatso, and “Bad Seed” Sean Osbourne – talking about their issues with Bruce Santee & Sideshow. Niemi said Becky Bayless partied with 911 Inc. one too many times and was at the hotel recovering tonight. Niemi told Davis & Chavis to go to the back and find an opponent for Frankie Ciatso. Of course, they found the ultimate jobber, Miles Long, and dragged him to the ring. The beat-down didn’t last long before Bruce Santee, Sideshow, and Sedrick Strong made the save! Sideshow grabbed the mic and cut a promo on 911 Inc., promising to make an example out of Jon Davis tonight! Santee got to talk next, saying it was funny that 911 Inc. has always played the numbers game. Santee challenged Sean Osbourne & Francisco Ciatso to a match tonight, with Miles Long being Santee’s tag team partner! Strong also cut a promo and challenged Kory Chavis of the Dark City “Bitches” to a match NOW!

SINGLES MATCH
Sedrick Strong vs. Kory Chavis (w/Ron Niemi & 911 Inc.): Ron Niemi tried to distract the referee so 911 Inc. could interfere, but the plan was foiled by Bruce Santee and the backfire ended up costing 911 Inc. the victory!

TAG TEAM MATCH
Team Vision (Chasyn Rance & Mister Saint Laurent) vs. The Lifeguards: I am a fan of Mister Saint Laurent, but not a fan of his in-ring work. I would much rather watch him manage Chasyn Rance and a different tag team partner. They are building up the tag team division with the intention of creating a tag title in the near future. This was a short match, featuring nothing all that special, with the heel Team Vision pulling out the win!

LAST MAN STANDING MATCH
Eddie Taurus vs. Damballah (w/George Martel & The House of M): Pretty strange to have a last man standing match so early on the card. Damballah was escorted to the ring by George Martel and his House of M alliance including Lou The Fixer, Snow, and ??????. It felt more like the old Dungeon of Doom! Eddie Taurus is the quintessential babyface indy star; adored by locals without having any unique qualities. The referee wisely banned all of the disturbed House of M members from ringside before the match, allowing only George Martel to remain at ringside. Taurus was not fairing very well against the monsterous Damballah. Eventually Bumz R’ Us hit the ring and helped Taurus put down Damballah for the 10-count!

FALLS COUNT ANYWHERE MATCH
The House of M (Snow & Lou The Fixer w/George Martel) vs. Bumz R’ Us (Ray Beez & Mr. Milo Beasley): The previous match morphed into a chaotic falls count anywhere tag team match. Lou The Fixer is a menacing giant, but lacks important skills. Snow is an obese blob who is difficult to watch. The Bumz basically had to carry the match, and sell for the monsters from the House of M. The match eventually spilled out of the arena and into the loading area. The camera was out of focus due to the humidity so we didn’t get to see much of the action. Snow was locked inside the back of the truck, and the Bumz ended up on top of the truck! Beasley jumped off and grazed Lou The Fixer, having his legs crumble awkwardly beneath him. The Fixer was then placed on a table and Beez jumped off the truck and crashed through it for the win!

SINGLES MATCH
Jerrelle Clark vs. Scott Davis: I became a fan of Scott Davis on the previous DVD. He is a cross between Arn Anderson and Steve Austin‘s “Ringmaster” gimmick. Davis put his technical skills up against the high-flying skills of Florida sensation Jerrelle Clark. Every PWR event has at least one match with absolutely no gimmicks, getting back to the business of pro-wrestling. This is when wrestlers truly shine. The heel Davis ended up winning with an illegal chop-block and scoring the pin with his legs on the ropes for leverage.

2008 JCP QUALIFYING MATCH
Nooie Lee vs. Jaison Moore: They spent much of this match talking about Jeff Peterson and the history of the Jeff Peterson Cup. That DVD has already been reviewed here. The whole concept is just wonderful and worth checking out. The match was fought clean from beginning to end, which resulted in a time limit draw. At first they ruled that neither man would qualify for the tournament. Both men begged for five more minutes. The referee granted them five more minutes! So it DOES happen sometimes. The match ended in a draw again, but this time they decided to grant both wrestlers spots in the Jeff Peterson Memorial Cup tournament!

GRUDGE MATCH
Sideshow vs. Jon Davis of 911 Inc. w/Ron Niemi: Jon Davis came out with members of 911 Inc., so Sideshow brought out some of his friends to make sure 911 didn’t commit any crimes at ringside. There was lots of stuff going on outside the ring throughout the match, with both troops protecting their own man, while trying to do harm to the other side at the same time. When the smoke cleared, Sideshow scored the victory! Sideshow had no time to celebrate before the ring filled up and the main event began!

TAG TEAM MATCH
Bruce Santee & Miles Long (w/Amy Love & friends) vs. 911 Inc. (Francisco Ciatso & Sean Osbourne w/Ron Niemi & 911 members): The pale-skinned jobber (Miles Long) got his first shot at main eventing a wrestling event. He was in there with the big boys. Long played the part of punching bag for the 911 guys for most of the match, while Bruce Santee waited for the hot tag. Late in the match, Santee entered the match and there was a brief flurry of offense, but 911 Inc. recovered and pinned the rookie to win the match! Bruce Santee cut a promo after the match praising Miles Long for working his ass off. Santee talked about 911 Inc. embarrassing him and laying their hands on his wife (Amy Love). Santee plugged the Jeff Peterson Memorial Cup and challenged 911 Inc. to a 5-on-5 War Games-style Cage match!

For more information on PWR, go to www.ProWrestlingRiot.com today!