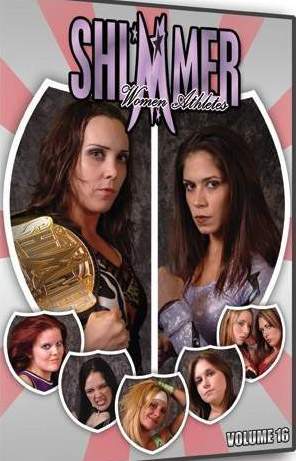 MATCH
Amber O’Neal vs. Lorelei Lee: Amber O’Neal shook her hot-pink ass on the way to the ring to face “Country Girl” Lorelei Lee in the opening match of Volume 16. The Country Girl is not thin, but possesses an incredibly hard body (solid abs), as a result of her superior fitness and nutrition philosophies (See: http://www.2good2be.com). Despite being one of the most experienced women in SHIMMER, Amber O’Neal has been on a very disappointing losing streak. The announcers have constantly gotten on her case about caring more about her own looks than picking up victories in SHIMMER competition. Lorelei Lee knows better than anybody what effect a losing streak can have on your career, after her streak resulted in her being left off volume’s nine through fourteen. Lorelei finally got back on track with a victory over the legally blond, Amber O’Neal.

TAG TEAM MATCH
Portia Perez & Nicole Matthews vs. Portuguese Princess Ariel & Josie: Portia Perez is a really well seasoned heel (despite her youth), whereas British Columbia’s own Nicole Matthews still needs a little work – but being in SHIMMER will speed up that process. The rowdy fans in Berwyn did not welcome to all-Canadian heel team of Perez and Matthews, who are calling themselves “Frickin’ Awesome.” Ariel and Josie made the fans happy by ending the winning streak (of one match) of Frickin’ Awesome once and for all.

BACKSTAGE INTRVIEW
Becky Bayless & The Minnesota Home-wrecking Crew (Rain & Lacey) + Jetta: If there is one thing I usually cannot tolerate in wrestling it is obnoxious motor-mouth heel behavior. I can’t explain why, but for some reason I can tolerate Rain and Lacey – maybe because they have the in-ring skills to back it up. Rain and Lacey fast-talked their way towards introducing the “honorary home-wrecker,” straight from the UK, JETTA! Jetta might as well have been cut from the same mold as Rain and Lacey.

MATCH
Alexa Thatcher vs. Ashley Lane: Alexa Thatcher has had some pretty strong outings, but has yet to pick up a victory in SHIMMER competition. I like to call Thatcher every boy’s high school crush, because she just looks like that kind of girl. I can’t stress enough how good she is in the ring, though. Ashley Lane, who some may know as Lexi Lane, is a tiny skinny blond with a lot to prove. I’m definitely not sold on her yet, but this match helped her gain some much-needed experience. Alexa looked really good, in more ways than one, with this victory over newcomer Ashley Lane.

TAG TEAM MATCH
The Experience (Lexie Fyfe & Malia Hosaka) vs. Allison Danger & Serena Deeb: Fyfe and Hosaka were all-business, as they went up against a formidable team made up of SHIMMER ambassador Allison Danger and OVW star Serena Deeb. I really went overboard on praising Serena’s smokin’ body in my last review so I will not mention how incredibly hot she looks in this review. Dave Prazak got a chuckle out of me when he referred to them as “Dangerous and Deebious.” It turns out Danger and Deeb actually make a pretty good tag team, but the Experience out-smarted them and stole a nefarious victory. I’m afraid that by the time SHIMMER creates a tag team championship, the Experience is going to be stale and boring.

MATCH
Daffney Unger vs. Cindy Rogers: I know Daffney hasn’t used the “Unger” name in a long time, but I think her former WCW name is one of the coolest gimmick name’s of all-time – so, to me, she always be an Unger! Daffney has to be the only person to be in the business for ten years and still wrestle like a green rookie. To be fair, she didn’t start wrestling serious matches until about two years ago. Everybody loves Daffney, though, including me, so we forgive her. Daffney’s promos are borderline torturous, though. Cindy Rogers is a good opponent for Daffney, and she was definitely be able to carry the Scream Queen to a pretty decent match. While Rogers remained stone-faced, Daffney was goofing around to loosen up the fans. Early in the match, Daffney went down clutching her knee – reminiscent of her match with Malia Hosaka on Volume 14. I’m pretty sure the injury was a work. Cindy Rogers focused on the knee for the rest of the match, and forced Daffney to submit to the pain.

TRIOS TAG TEAM MATCH
The International Home-wrecking Crew (Rain & Lacey & Jetta) vs. MsChif & Daizee Haze & Eden Black: The “honorary home-wrecker” Jetta is the UK nemesis of “Jezebel” Eden Black, and there is plenty of history between Rain/Lacey and MsChif/Haze going back many years. Randon note to Dave Prazak: I want to see Eden Black vs. Portia Perez. Rain came up with the ingenious idea of wearing protective goggles to avoid getting sprayed by MsChif’s dreaded “green mist.” The pre-match stalling was unbearably agonizing, as the three home-wreckers milked the fans for all they were worth. They couldn’t decide which one of them would start the match against MsChif. After a long back-and-forth exciting six-girl-tag match, the blond, black, and red combination of Daizee, MsChif, and Jezebel were victorious over the trio of arrogant cuties. The real victim of the match was Daizee’s gimmick flower, which was assaulted by Jetta mid-way through the match!

MATCH
Cheerleader Melissa vs. Amazing Kong: Amazing Kong was extra pissed after a controversial loss to SHIMMER champion Sara Del Rey on Volume 15. Kong was not pinned by the champion, but instead was counted down after a high-impact exchange with Del Rey. Another loss would destroy Kong’s chances of getting a rematch with Sara Del Rey for the SHIMMER title. Melissa, on the other hand, is on a huge winning streak, and also has her eye on a future shot at the SHIMMER championship. The stakes were as high as ever. It took a gigantic splash from the second rope from Amazing Kong to end Melissa’s winning streak, and put the aggressive Kong back the title hunt. The match seemed to end quickly and could have been a little bit longer.

SHIMMER TITLE MATCH
Sara Del Rey vs. “Dark Angel” Sarah Stock: A dream come true for yours truly, my two favorite female wrestlers battling for the SHIMMER championship in the main event of a high-profile SHIMMER DVD. The American Angel defending against the Dark Angel, who I personally consider to be a Canadian Angel. To make this occasion all the more special, it was a rare two out of three falls contest. Thank you, SHIMMER. This is the first time I’ve ever seen Sarah Stock wrestle somebody that is anywhere near her level. Del Rey scored the first fall, putting the challenger at a severe disadvantage. After a few minutes of intense grappling, Sarah Stock became only the second person to pin Sarah Del Rey in SHIMMER competition – the other being Mercedes Martinez. Unfortunately it wasn’t enough to claim the gold (yet), as Stock needed to score another fall to achieve her goal. Essentially it was sudden death, as the two battling beauties struggled for the third and final fall of the match. They exchange several near falls, as both women ignored the fatigue which began to set in. Del Rey scored a very quick surprise roll-up, reminiscent of her mentor (Bryan Danielson) to finish off Stock and retain the SHIMMER championship! Stock was a good sport, and shook hands with the champion after the match! God bless those beautiful Angels. Rematch! Rematch! Rematch!