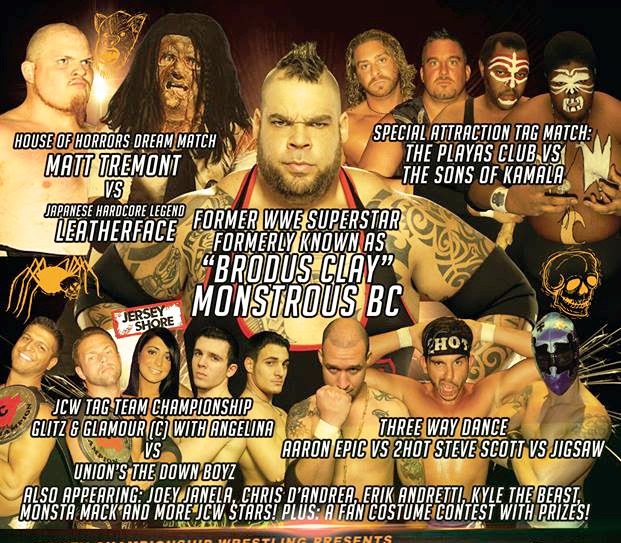 It’s happening THIS FRIDAY, Jersey Championship Wrestling welcomes the man formerly known as Brodus Clay, Monstrous BC to Union, NJ! The former WWE superstar joins the Japanese Deathmatch Legend Leatherface for an event that promises to start the horrors of Halloween a little bit early this year!

Four matches have already been announced, and two come with a warning for extreme violence!  As mentioned above, Leatherface will be in the house, and his opponent will be local hardcore specialist Matt Tremont!  The juggernaut tag team of La’Fu and Mubutu, better known as The Sons of Kamala will square off against Playas Club representatives Damien Darling and “The Cold-Hearted Playa” Danny DeManto!  Can the Playas serve up the Sons’ first loss in JCW, or will La’Fu and Mubutu continue their path of destruction through the Union Elks Lodge?

In additional tag team action, Steve Sterling and “Bright Lights” Jarrett Foster – the JCW Tag Team Champion team of Glitz & Glamour will once again be managed by Jersey Shore’s Angelina as they match up against Steve and Tony, The Down Boyz!  With Angelina in the champs’ corner, and the rest of Union NJ behind the hometown Down Boyz, get ready for possibly the loudest match of the evening!

A special Three Way Dance has been signed, pitting Aaron Epic, Jigsaw, and “The Selfie Superstar” 2Hot Steve Scott against each other, one-on-one-on-one!  It’s a combination of technique and high-flying ability that will leave the crowd breathless!

Doors open at the Union Elks Lodge on Chestnut Street at 6:45pm, and the action gets underway one hour later.  Get your tickets and reserve your seats now!  Card subject to change.

A Stacked November In JCW
The lineup for November 2014 is shaping up to bring Jersey Championship Wrestling fans one of the biggest months in JCW history!  The month starts off with Devon and Bully Ray of Team 3D coming to Keansburg, NJ on November 8th!  One week later, Manville, NJ will bear witness on November 14th to the historic return of the Jersey J-Cup Tournament, featuring Chris Sabin, the homicidal, suicidal, genocidal, death-defying Sabu, and 14 other competitors!  We wrap up the trio of incredible November events in Howell, NJ on November 21st with WWE legend Tatanka, Brian Myers (fka Curt Hawkins), and former WWE superstar Matt Striker!

Come see JCW Live!
Tickets for all upcoming Jersey Championship Wrestling events can be purchased through the JCW website at JerseyChampionshipWrestling.com or by calling the ticket hotline at (201) 257-8621.  VIP packages and local ticket outlets may be available as well – check the website and posters for details!  All cards subject to change.