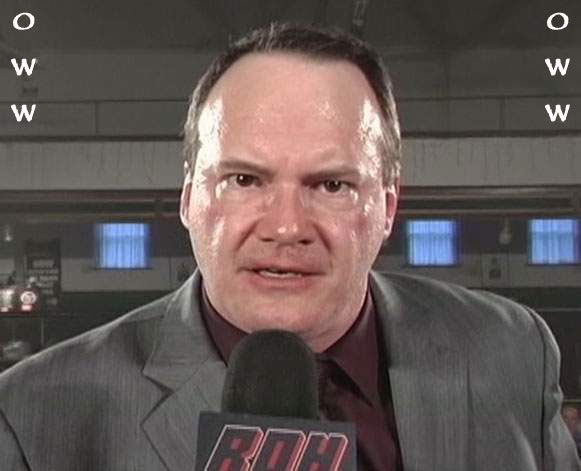 Jim Cornette Discusses Ring Of Honor’s Long Awaited Return To Buffalo, ROH’s Death Before Dishonor VIII Internet Pay-Per-View, The Growth Of The Company Since His Return At The End Of Last Year, Why The WWE Made Bryan Danielson A “Scapegoat,” The Likelihood Of Seeing “The American Dragon” Returning To Ring Of Honor, Why Paul Heyman Is “Way Too Smart” To Get Involved In TNA, & Dixie Carter’s Tease Of Changing TNA Forever

The Executive Producer of Ring of Honor on HDNet, Jim Cornette, was one of the special guests on this week’s edition (06/14/09) of the award-winning Monday Night Mayhem. You can feel The Mayhem live every Monday night (at 7PM ET/6PM CT), exclusively on The Monday Night Mayhem Radio Network (www.MondayNightMayhem.com).

Jim joined The Big Mosh, Jimmy Noonan, & “The Chairman of the Board” Todd Vincent for his return to “Your Home of Wrestling Radio” (to preview Ring of Honor’s highly anticipated return to the Buffalo, NY market, along with the forthcoming “Death Before Dishonor VIII” iPPV in Toronto, Ontario, Canada), which is now available in Windows Streaming Media or via Monday Night Mayhem’s official Podcast on iTunes:

Ring of Honor’s growth since he returned to the promotion at the end of last year: The talent roster has been tremendous. We have had a couple of big additions. Christopher Daniels, most notably, has been a real shot in the arm for the match quality on the cards. Also, television with HDNet continues to get stronger as more people across the country are able to see HDNet. Also, the amount of new markets & different things ROH has done. We opened up Charlotte in April, and we’re going back there in August. We’re going to Richmond, VA for the first time in August; Buffalo for the first time in five years; Louisville, KY: my hometown is going to make its debut July 22nd at The Davis Arena, the old home of OVW. So a lot of big markets opening up, a lot of great matches, a lot of things are happening. The guys are excited, the matches are off the charts, so all in all, things are cooking right along.”
The recent announcement from TNA President Dixie Carter that a major surprise is coming soon that will change TNA forever: “As the news went out that TNA is going to change forever…again. How many times in the last six months have you heard that TNA is going to change forever? And it keeps changing forever for like three weeks, and it changes again. I don’t know what Dixie Carter is talking about, but short of Merlin the Magician popping up to transform them into a viable wrestling promotion, I think it’s going back to her PR background. When you completely lost in the woods, and you have nothing else to do, you’re at your wits end. Promise people a huge surprise & a big change, and by the time you realize it’s not coming, then you got out of that particular hole you were in.”

Why he believes that the WWE made Bryan Danielson a “scapegoat” & whether we will see “The American Dragon” back in Ring of Honor following his release from World Wrestling Entertainment: “The news was put out what Friday night at about 8 or 9. WWE, knowing that they were making a decision that was probably off the charts in terms of stupidity, and they made an innocent guy a scapegoat for something who knows what, they fired Bryan Danielson for choking somebody in an wrestling angle. What are they going to do next? Are they gonna fire Wolfgang Puck for using chicken in a chicken dish? Are they gonna fire Magic Johnson for dribbling a basketball? Somebody made Bryan Danielson a scapegoat because of their PG rating, or their Senate run, or any number of things that the WWE are into now, trying to get away from the stigma of them being professional wrestling promoters, which they are but they won’t admit it, and they are taking one of the brightest young talents in the business, who has a lot of fans, and they pissed them all off. I don’t understand it. As to whether Bryan will be in Ring of Honor, of course we would love to have him back, and of course/on the same token, since he has just been released, he’s obviously under one of their non-compete clauses, which I would love to someone challenge one of those in court one day. It’s just another example of ‘We’re gonna go to the zoo and scoop up a handful of monkey feces, and we’re gonna throw it in the face of every wrestling fan,’ because we will continue to give you all of this child-like, inane, inconsequential pablum we give you on television every week, but when we accidentally hit the somebody that people want to see, we’re gonna screw that up as quickly as possible. It’s ridiculous. I would love to see Bryan Danielson back in Ring of Honor.”

His thoughts on one of the most anticipated main events in ROH history between Tyler Black & Davey Richards for the Ring of Honor World Championship at ROH’s Death Before Dishonor VIII iPPV: “I think it’s a huge match, because you couldn’t find any two people, both inside the ring & out, that are more different than Tyler Black & Davey Richards. But at the same time, they are at the top of the mountain and are some of the best at what they do. Tyler, to me, is a tremendous athlete, and he does some innovative things that I have never seen in professional wrestling ring, and I’ve seen a lot of wrestling. He has really come along and gotten confidence after he won the ROH World Title; and then you have a guy like Davey Richards: the first time I saw him I was blown away, because to me, he is a reincarnation of The Dynamite Kid. He’s got the intensity, he’s got the movements in the ring when he just explodes, he’s in tremendous shape, a driven guy, and he wants to be the best in the world, and when people chant ‘Best in the World’, he takes that seriously. It’s gonna be interesting, and I think two of the best guys in the business, and they are going to scorch it.”

The rumors of Paul Heyman joining TNA’s Creative Team, why he feels Heyman can write better wrestling shows than Vince Russo, & why he strongly believes that Heyman is “too smart” to join TNA: “If Paul Heyman went to dinner at Taco Bell, 30 minutes later he could squat down and crap out a better wrestling show format than Vince Russo has ever dreamed of in his life. But I think my old friend, ‘Happy Heyman,’ is probably way too smart to get involved in that political minefield. One, he’s not going to be part of the team, because that would be like putting the top NBA player on the court with a group of guys who they got from a pick up game from the playground. There’s nobody capable of even carrying Heyman’s pencil down there right now. Secondly, I think he’s too smart, because he doesn’t want his legacy diminished by going into a hopeless, fruitless cause, because even he was the only person on creative & doing it all himself, he’ll still have to deal with the TNA front office, and most of those people with the non-wrestling background are so inept that really I’m surprised, based on my experiences of being there for three years, that they can get anything done. I don’t think they would give Heyman the pull or control over everything that is necessary. I think Dixie would still try to stick her nose in, and I think he would be frustrated just as when he was trying to work within the WWE confines, where the people are a whole lot more competent, but not much more educated as far as pro wrestling. I don’t see him changing that structure (of TNA).”

More is contained in this exclusive interview with Ring of Honor’s Jim Cornette, including his uncensored thoughts/comments on the WWE’s PG rating & what it means for the wrestling industry, how ROH’s product is truly different from the WWE & TNA, the rest of the Death Before Dishonor VIII card, and yes…even more on Vince Russo! While gearing up for one of ROH’s biggest weeks in history, be sure log onto Jim Cornette’s official website (located at http://www.JimCornette.com), and purchase The Midnight Express & Jim Cornette’s 25th Anniversary Scrapbook, and get the latest news on where “The Louisville Slugger” is headed next. Log on to http://www.ROHWrestling.com & http://www.Tickets.com to purchase your tickets to Ring of Honor’s return to the Buffalo, NY area (at the Erie County Fairgrounds Agri-Center) this Friday night, June 18th, along with ROH’s “Death Before Dishonor VIII” iPPV in Toronto, Ontario, Canada (at The Ted Reeve Arena) this Saturday evening, June 19th. Unable to be a part of DBD VIII in person? Purchase the event right now on http://www.GoFightLive.tv for only $14.95!