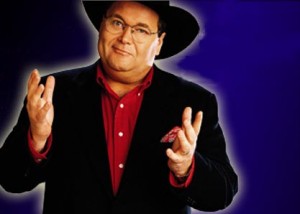 WWE Hall of Famer Jim Ross back with another blog update, which you can read in its entirety at JRsBarBQ.com. As always, you can buy JR’s delicious line of BBQ proudcts at WWEShop.com.
Here are some highlights of what JR wrote about:
Tyson Kidd Qualifying For MITB: “Happy to see Tyson Kidd’s success on Smackdown Friday night. Tyson has seemingly found his personality, so to speak, to go along with his significant in ring skills. I love his in ring persona, which will/should only get bigger and better, and the skill set that the Calgary Kid brings to the table. A recent NXT bout vs. Michael McGillicutty gave me all that I needed to see on both young athletes who have wrestling DNA running in their veins. ”
The New WWE General Manager: “Who do I want to see as the new GM of Raw and/or Smackdown? I’ve got no dog in the hunt but I know that isn’t a role that I would embrace or with which I would be be good.”
Breakout Performer Of The Year: “Who is the break out performer in WWE so farin 2012? Is there really any debate? It has to be AJ who has taken the opportunities provided her, the creative input she’s received and has made her role bigger than I’m sure many perceived that it would ever become. Obviously, AJ waited for her opportunity and maximized her minutes no matter how few or how insignificant that they may have seemed at the time.”