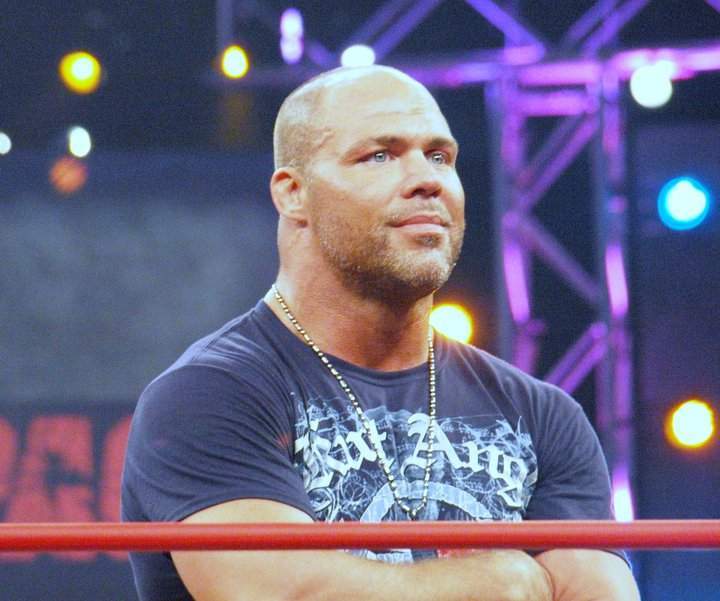 Kurt Angle Discusses The Details On The Knee Injury That He Suffered During The TNA iMPACT Tapings In Fayetteville, Why He Wants To Re-Sign With TNA & Retire With TNA (But Why He Cannot Count Out A Return To The WWE), His Initial Fears Involving His Children In His Feud With Jeff & Karen Jarrett, Why He Credits Hulk Hogan For Helping Him Through This Point In His TNA Career, If He Believes His Chances For The WWE Hall Of Fame Were Jeopardized By Signing With TNA, Whether Or Not He Would Embrace A One-On-One Match With Bart Scott If An NFL Lockout Transpires, The Importance of Transitioning Into A Part-Time Wrestling Schedule At This Point In Time In His Career, His Experience Of Filming “River Of Darkness” (And The Significance Of Bringing In Kevin Nash & Sid Vicious Into The Fold For The Film), How He Is Trying To Mirror What Sylvester Stallone Has Done In The Movie Industry, His Upcoming Films Lined Up Through North Shore Pictures For 2011 & Beyond, Plus What The Future Has In Store For Angle Foods

14-time World Champion, former Olympic gold medalist, & TNA star Kurt Angle was one of the featured guests on this week’s live edition of the award-winning Monday Night Mayhem. You can feel The Mayhem every Monday evening (at 7PM ET/6PM CT), exclusively on The Monday Night Mayhem Radio Network (www.MondayNightMayhem.com).

Kurt joined The Big Mosh & “The Chairman of the Board” Todd Vincent for his exclusive interview with The Monday Night Mayhem Radio Network (to promote the release of his new DVD “River of Darkness”), which is now available in Windows Streaming Media or via the official MNM Podcast on iTunes:

The experience of filming “River of Darkness” & how he is trying to mirror what Sylvester Stallone has done in the movie industry: “The movie (‘River of Darkness’), a lot of people will look at it, watch it, and think ‘Wow they put a lot of money into that movie.’ In reality, we only put $30,000 into this movie. North Shore Pictures is growing. What I wanted to do is 15-20 Hollywood films and do my own films. Right now, I’ve done three films in Hollywood, but I also wanted to do is what Sylvester Stallone has done in the movie industry, which is take on his own films, his production company, and come up with great films people would like to watch.”

What fears he had about heading into his current feud with Jeff Jarrett & his ex-wife Karen (especially with his children being seen on national television), if he has been comfortable in everything to this point, & why he credits Hulk Hogan for helping him through this point in his TNA career: “I never wanted to get the kids involved. I know that we have a little bit, but the kids are not allowed to watch the program. We’re going to continue to have them involved. I”m not all for it. There have been a few things I have been uncomfortable with in the storyline & the writing, but I’ve been a trooper, and I’m trying to be a team player. The one person who has really helped me out is Hulk Hogan. He’s really protecting me and making sure nothing gets out of hand. I have to give him a lot of credit, because he’s the one guy I really trust. Dixie Carter is a great woman, and I trust her too, but Hulk Hogan has been the guy. He’s kind of my buffer. I have a lot of respect for him.”

His reaction to those that feel it’s a foregone conclusion that he will return to the WWE when his TNA contract expires this August, the importance of him transitioning into wrestling part-time, & why that could be the determining factor if he stays with TNA or leaves for the WWE: “I love TNA. I love the way they treat me, I love the way they take care of me. My contract is up in August, and a lot of people think ‘Hey, Kurt Angle is going over to the WWE.’ I can’t really tell you where I’m going, but I do want to say that I am very happy in TNA. We just have to work out our new contract, and God willing, we do it the right way, and I won’t have to worry about coming back to the WWE, but I don’t want to count that out. I love WWE, but I love TNA even more. Hopefully, God willing, Dixie Carter & I can come to an agreement, and I can start wrestling on a part-time basis. I’m forty-two years old right now. Some days I feel like I’m sixty-two. It really comes down to how they use me. my job in the company is to have the best match on the card every Pay-Per-View. In order to do that, I have to be well-rested. I like to do house shows, I love to do TV’s, but I do have to make sure that I am ready for the Pay-Per-Views, because that’s the most important thing. Dixie Carter has been very good about making sure that I will be ready. I do want to sign a deal with TNA with Dixie Carter for the next three years, and I do want to retire in TNA, but I can’t guarantee that I will do that.”
More is contained in Monday Night Mayhem’s exclusive interview with Kurt Angle, including a revealing look at the knee injury that he suffered at the TNA iMPACT tapings in Fayetteville while putting Karen Jarrett through the wedding cake, whether or not he would embrace a one-on-one match with New York Jet star linebacker Bart Scott if an NFL lockout came to pass, why he feels that he may have disappointed Vince McMahon after signing with TNA, if he believes that leaving World Wrestling Entertainment for TNA may have jeopardized his chances for the WWE Hall of Fame, his top three opponents of all-time, his recent experience at the 2011 Arnold Classic, the significance of bringing in Kevin Nash & Sid Vicious into the fold for “River of Darkness,” what the future has in store for Angle Foods, his upcoming films lined up through North Shore Pictures for 2011 & beyond, plus so much more! Log on to Kurt’s official website (located at www.KurtAngleTNA.net), along with the official online portal of Angle Foods (located at www.KurtAngleFoods.com). Get the very latest on Kurt’s forthcoming projects through North Shore Pictures by logging on to www.NorthShore-Pictures.com). And be sure to follow the only Olympic gold medalist in professional wrestling history right now on Twitter (at www.Twitter.com/AngleFoods1).