Home / Columns / Larry Mercer: A Legend in the Making 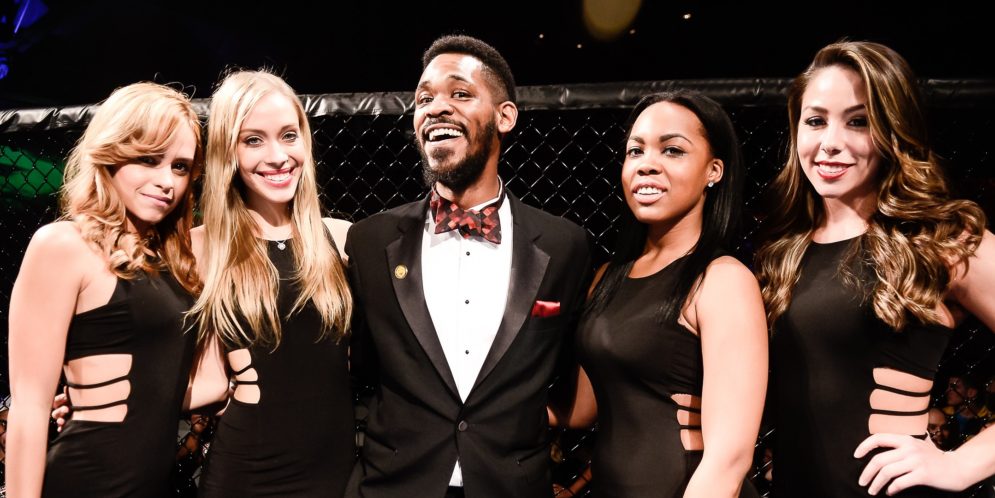 Larry Mercer is a man with passion. A man that has endured personal and professional hardships yet continues to rise above. Mercer gained popularity as a ring announcer/performer on the pro wrestling and mixed martial arts scene under the moniker “Larry Legend.” His announcing style and natural charisma have helped him climb the ladder of success in the professional combat sports industry enabling him to live his dream finding success as an in-ring announcer for various combat sports organizations and having worked for Sinclair Broadcasting as the Ring of Honor (ROH) Merchandise Coordinator. His achievement is admirable but the story of how he got there is just as impressive.

Born and raised in a single parent household in Baltimore, Mercer always had an interest in the performing arts and was an avid professional wrestling fan as a child. When asked which wrestlers he identified with the most, he said with a chuckle, “Andre the Giant was my favorite. I thought he was black when I saw his afro.” Mercer also credits his passion for announcing due to the positive influence of the announcer on the Arsenio Hall show. “My grandmother used to let me stay up late and watch Arsenio and I was captivated by the announcer and they way he would introduce the talk show host,” he remembers.

The acting bug bit Larry hard as he grew older and he spent his high school years performing at the George Washington Carver Center for Arts and Technology in Baltimore where he excelled in plays like Fences and Guys & Dolls. Despite the financial burden of attending a renowned college like NYU, (Mercer said that his mother had to take out a second mortgage on their home), he was accepted and moved to New York to attend the NYU Tisch School of the Arts as a theatre major and was placed in the Stella Adler Conservatory of Acting.

Unfortunately, after his second year in college the financial strain of NYU became a burden to his family and he dropped out with the intention of moving home to Baltimore and re-enrolling at NYU after a few years’ time. He felt strongly that New York was the best place for him to be as an aspiring actor. In the meantime, Mercer worked at Old Navy in Baltimore and started a backyard wresting company with his close friend, Craig Swenson. He performed both as a wrestler and an announcer while making home videos for the viewing pleasure of his friends. “We originally got together for Thanksgiving in 1999 and went over to a friend’s house and this particular friend of ours had a camcorder. WWF had just shown the footage of Mick Foley jumping off the roof and they also mentioned that the Hardy Boyz were backyard wrestlers,” said Mercer. They named their backyard wrestling company the UWF, an acronym for  “Underground Wrestling Federation” after briefly calling it the “Sudbrook Park Wrestling Federation.”

As it turns out, backyard wrestling was the thing that ignited Mercer’s passion to push him to eventually work in the professional wrestling industry. According to Mercer, the Maryland State Athletic Commission was intent on shutting down local backyard wrestling shows due to safety concerns and local promotions like Maryland Championship Wrestling would assist in identifying these groups to the authorities. As it turns out, Maryland Championship Wrestling would actually end up playing a much larger role in Mercer’s life.

Mercer reminisced that he first saw a commercial for Maryland Championship Wrestling during an episode of Monday Night RAW which advertised to individuals that were looking to become wrestlers. Larry called the phone number but inquired about becoming a booker as opposed to being a wrestler. “I let them know I didn’t want to be a wrestler because I don’t think I had the discipline to keep a body,” said Mercer. He continued, “I’m not gonna lie, I wanted to be Paul Heyman. I wanted to be that guy, the ECW creative mind.” He called MCW and the owner, Dan McDevitt, asked him to come to the office. Dan claimed that they could assist Larry and provide connections and industry knowledge in exchange for a down payment fee of $750 plus a monthly fee thereafter. Larry continued to work his day job in retail and worked at night as an administrative assistant for MCW in addition to working ring crew and merchandise as well.

As time passed, he was eventually placed on the MCW payroll, making $25 at live events in exchange for working the merchandise stand and being “the guy behind the guys.” He continued, “My nickname was Larry Office. Gillberg would sometimes joke and call me ‘orifice.’” Mercer always kept a positive attitude and continued to work hard because he loved what he was doing. By late 2002, MCW ring announcer Steve Venturella vacated the position to join the police academy leaving an opening and one day in the office, Jeff “The Judge” Jones of ECW fame suggested to Dan McDevitt that Larry would be a good announcer. A week later, McDevitt told Mercer to get a suit and he would get his chance.

On December 4, 2002, Larry was given a shot to announce his first MCW show (with no initial pay raise) and debuted under the name Larry Kennedy Phillips. Mercer noted that “Kennedy was for Vincent Kennedy McMahon and Phillips was for the African-American announcer Mel Phillips from the early 90’s/late 80’s.” Due to a predominantly white crowd, Mercer was directed to act as a heel announcer that would instigate the crowd playing the reverse race angle. Although he questioned his decision to play this role, he did what he felt he had to do to in that moment which allowed him to spotlight his talent. Over time, he was able to cement himself as an important part of the company forming a strong relationship that ended up lasting almost ten years.

By 2005, Larry was given an opportunity to work for Combat Zone Wrestling when his friend Ruckus thought he could add something to “BLKOUT”, not just a stable but “The Label.” Mercer would serve as the Label’s personal ring announcer and manager. This is also where he met one of his closest friends in the business, Pinkie Sanchez. Larry continued to plug away for a few years, honing his craft within the wrestling industry eventually deeming himself as “the Master of Ceremonies” for CZW due to all of the responsibilities he fulfilled at shows in addition to his actual ring announcing responsibilities.

All of this experience parlayed into a job with New York Wrestling Connection in 2009 as Larry became their full time ring announcer. His time at NYWC opened the door for Mercer to announce for mixed martial arts events as well. NYWC would rent their ring and arena to local MMA promotions such as Jack Hammer Promotions, which also would receive Larry as the ring announcer as part of the package. “If I could say there would be any company that really put me on, it was NYWC because by doing NYWC and by them kind of tying me into their ring rental to Jack Hammer Promotions, that’s how I was first noticed by a promoter named Jac Sabboth, who runs a company called Impact Championship Wrestling.” Sabboth enlisted Mercer to replace Stephen DeAngelis (who was also a former ECW announcer) as the lead announcer for ICW which gave Mercer increased visibility resulting in future ring announcing work with Combat Zone Wrestling, Dragon Gate USA, EVOLVE and eventually Ring of Honor.