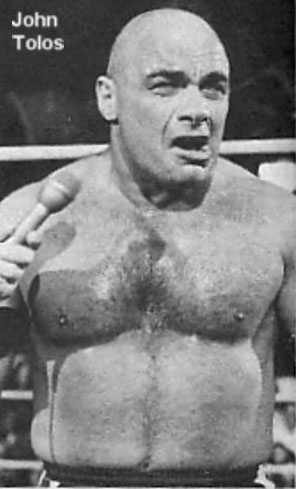 I ran his fan club in the 60’s and 70’s and any of us who stayed close to him all those years to current are devastated by this. Last time we spoke about three weeks back, he sounded very weak on the phone. You could make out everything he said, but he was tired. And no doubt in a bit of a funk since in the last few years his near 100 year old beloved mom and brother Chris died (who he named his son after). Then the stroke that cruelly took away one of his many gifts- his speaking and promo skills; but he fought hard ala Bret to regain the speech and won.

Losing Buddy Rogers, Lou Thesz, Classy Freddie Blassie, The Sheik, Killer Kowalski-all long, long friends of his really hit hard too. At his last Cauliflower Alley Club Reunion he lamented losing so many good friends like Monsoon, etc and it was very poignant. His favorite promoter of all time to work for was Paul Boesch, where he took several trips away from Lebell and enjoyed himself he said for the first time in a long time, with a promoter.

John passed away at Valley Kaiser Center reportedly from kidney failure. But I think at such a young age, only 78; IMO it was a broken heart. He was one of the very last who’d never break kayfabe on my radio show; never. He loved and defended the biz and well, he was around it since ’49, but didn’t have his first match until ’51 or ’52 he said.

He and Classy Freddie Blassie WERE Los Angeles wrestling. John’s promos were state of the art and ahead of their time back then, commenting on current events, etc. No one came close, save the incredible Curtis Iaukea.

I’m driving the 8 hours as his 60’s and then 70’s Int’l Tolos Brothers Fan Club president to say a few words at his funeral Thursday where we’re hoping for a record crowd for this class act. The Golden Greek. He encouraged me to write and shoot for the magazines–“you’re good kid.”

Ladies man, bon vivant, everyman. The guy was amazing whether he was in with one of his peers like a Thesz, Gagne, Kowalski, Monsoon, Johnny Valentine, Bastien, Pepper Gomez or carrying someone talented far younger like a Mil Mascaras. Or even the greenest of young kids at the time to what felt like a great match: Ruben Juarez, Alex Wright’s dad Steve in ’73, Raul Mata, Ruben Juarez, Cowboy Frankie Layne, Mando Lopez. And even non-talents like LA Rams active player Duane Allen who was horrid with anyone else, but John made the guy look like a million bucks and took pride in that.

His matches with Baba and Inoki (and teaming with Baba) in SoCal were amazing. And he wowed them on his many tours of Japan, later becoming a mainstay for Inoki.

Well, before Flair ever had the suits torn off him(and many say besides absorbing from Rip Hawk, Ray Stevens and Buddy Rogers that he also might’ve used some of Tolos and Blassie playbook material),  John was cutting a Dec 12th, 1971 promo for our secondary show, the Wednesday night Olympic Aud tv tapings that aired 90 minutes later after post-pro.

John had recently turned face against area heels Kenji Shibuya and Massa Saito, Gordman and Goliath after taking off “the Golden Mask” as Destroyer’s masked partner who ala Pat Patterson, every one knew the identity of(but, what a team they were briefly, trading off 5-star barbs at the mike).  It was our territory’s last show of 1971(our Christmas card), and John said he’d rid the area of all those 4 “goofs and give everyone a holiday present.”  S and S came from behind, attacked him and stripped John down to his boxer shorts from the suit and tie he was wearing.  He didn’t give an S and continued cutting his promo in underware,  black socks and dress shoes and was quite the site(the boys offstage watching him cut another classic promo, in quiet but major awe).  John said “to fight fire with fire, I’ll have to bring in the biggest guy in wrestling.   That would be…Giant Baba!”   John told Gene Lebell who was holding the mike.

Everyone went nuts since Baba had had some good matches out here as a normal face in L.A.(not doing any Japanese heel schtick thankfully) against the likes of Fritz Von Erich, Sheik, Blassie, Buddy Austin, The Pro Doug Gilbert and others.  John and Baba basically squashed S and S,  and the sold-out Olympic fans went nuts on this early Christmas ’71 treat.  Baba gave John the Dick Beyer post-match-success treatment, lifting him up high up on his shoulder with Red Shoes Duggan raising Baba’s other hand up in victory.  Something very special.

2 years later, John promised a “one night only, incredible once in a lifetime tag partner to destroy these ‘pencil-neck’ Hollywood Blondes.  I can’t stand ’em.  I’ve made the call to the WWWF and I’m bringing in Blassie!  Yeah, you heard right.  Classy Freddie Blassie.   We’re gonna destroy these two idiots!”

And the match was even more incredible, with yet another sell-out Olympic Aud crowd going nuts seeing the L.A. territory’s top babyface legends teaming and moping up the floor with Roberts, Brown and Hump.  To call it thrilling to shoot would be an understatement as I’d never heard the big O that loud.

Both were emotional nights for the boys backstage and for John in particular. It would be the last time John was in the ring with Shohei Baba and his 2nd only time teaming with Fred, but the one and only time as beloved faces.  But certainly not with his top singles foe in Blassie.

I’m biased, but did I already mention John was way ahead of his time with the pythons, Roman Gladiator Death match unique stips…and those state-of-the-art promos of his?   Only the incredible Curtis Iaukea could give John a run for his mono in the mike department.