My Tribute to Miss Elizabeth 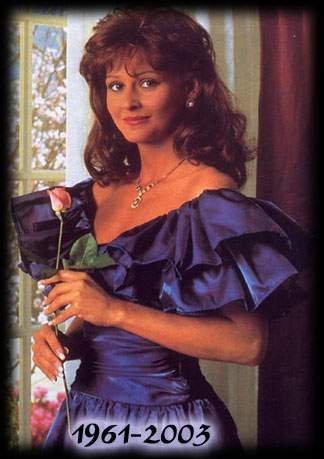 I don’t make it a habit to pay tribute to fallen wrestling personalities with a big article or column. That would be a full time job. But when I heard about the shocking news of Elizabeth’s passing, I felt compelled to say a few words in her honor.

Liz had more class than all the divas in the WWE combined, and then some. Elizabeth broke into the wrestling business as a shy, soft-spoken, stand-by-your-man valet. Even Randy Savage, who treated her like crap, always came back for more of Elizabeth’s sweet southern nature.

I’m not afraid to admit it, I had Elizabeth’s poster on my wall growing up. You know, that head shot with a ton of cleavage that made any man (or adolescent boy) drool with excitement. I even did my best to hand draw my version of the photograph (bare in mind I am not an artist).

Elizabeth was the original diva. She, however, possessed a very important quality lost on divas who came later, class. You had to respect her. She was beautiful. She was classy and she stuck to her morals, no matter how badly she was treated in any storyline. 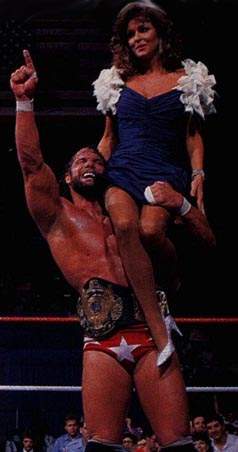 She would never have gotten over in today’s market. Vince McMahon would have laughed at her. That just goes to show how bad Vince’s judgment has gotten over the years. She wasn’t the best actress by any means, but she gave us some of the most memorable moments in the history of wrestling, and I am going to talk about a few of my favorite Liz moments:

1. While Elizabeth’s debut character didn’t exactly portray a great image of women, it eventually morphed into a great role. Early on, it was never acknowledged that Randy & Liz were married, but you could sense there was a relationship, and Randy Savage was very abusive towards her. Yet, she stuck by her man through it all and never was that so obvious when she through herself between Randy and Honky Tonk Man, to prevent her name from getting whacked with his guitar!

2. Sexuality had never been portrayed in WWF storylines, and Elizabeth didn’t make a habit of it, but when she dropped her skirt at Summerslam 1988, it was enough to turn even Andre the Giant to stone (so to speak), helping the Mega Powers defeat Andre & Ted DiBiase!

3. When the Mega Powers exploded, the match that lit the fuse was definitely Elizabeth. Don’t you just love the old days, when a storyline took a whole year to unfold, as opposed to the two weeks before a PPV like they do it now? The night that Randy Savage and Hulk Hogan finally broke up was all in the hands of Elizabeth, she got whacked (so to speak) and the drama went on from there. Hulk Hogan carried her backstage for urgent medical attention, leaving Randy Savage in the ring alone to fight the Twin Towers. When the Hulkster returned, he was met by a sharp slap to the face from Randy Savage. After Hulk finished the match, Randy Savage brutally attacked him in the backstage area!

4. Elizabeth and Randy went their separate ways for a while, Randy became a heel, and called himself the Macho King of Wrestling for a while. When he lost a retirement match to the Ultimate Warrior at WrestleMania 7, Randy was left without a career. Queen Sherri was kicking him while he was down, and who should come his rescue? Miss Elizabeth! Randy Savage got to his feet, recuperated and embraced Elizabeth in one of the most emotionally charged moments in wrestling history! (I know I sound like Jim Ross but in this case, it was true!)

5. Shortly after their reunion, Randy Savage grew a set and asked Elizabeth to marry him in the middle of the ring. It all seemed a little cheesy until Elizabeth opened her mouth and said “Ohhhhh yeeaaahhhhhhhhhhhh” and then we KNEW it was A LOT cheesy. But it was great!

6. The wedding took place at SummerSlam 1990, and went off without a hitch (really?) until the reception when Liz opened a gift and found a cobra snake inside! Jake Roberts & Undertaker appeared out of nowhere and harassed Liz with the deadly serpent!

7. Randy was still banned from wrestling, so he took up announcing, not a bad way to make a living, but Macho Madness had to run wild again soon. Randy was attacked on Television by Jake Roberts, who brought a venomous snake to the ring with him and allowed it to actually BITE Randy’s arm! Out comes Liz to try to save her husband but to no avail, the damage has already been done.

8. When Randy & Liz met up in WCW a few years later, it was a different story. This time it was Liz screwing Randy! Liz managed to help Ric Flair defeat Randy Savage in a steel cage by slipping her shoe into the ring and Flair used it on Macho Man! Liz would then became one of three valet’s for Ric Flair and the Four Horsemen. 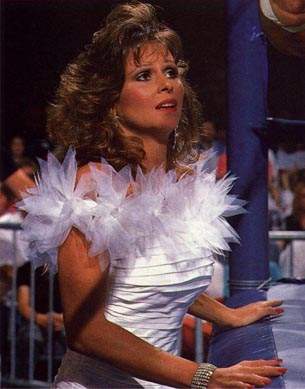 9. If Elizabeth intended on staying a heel, she had to develop a mean streak to keep it believable. When she sided with her new real life boyfriend, Lex Luger, they had a short feud with Sting. Elizabeth took advantage of an opportunity to violently swing a baseball bat at Sting’s head! This is an Elizabeth we have never seen before!

10. Unfortunately the final shocker came on May 1, 2003 when the world learned that Elizabeth had tragically died at the age of 42 as a result of an apparent overdose. I myself had no idea Elizabeth had been mixed up in such activity and find it unfortunate that such a beautiful lady was taken away from us in such an evil way.

I always enjoyed Elizabeth, she was a true roll model for humanity and current wrestling Divas should get down and kiss the ground Liz walked on because she paved the way for all female wrestling personalities. Unfortunately somewhere along the way, they dropped the CL from CLASS..

Good Night Elizabeth, I love you just the same.. Rest in Peace……

Thank you for being you.

B.L. wrote: Thank you very much for saying what all of the real wrestling fans were thinking on the subject. Rest in peace Miss Elizabeth, your presence will truly be missed.

karl wrote: ill never forget the time i first saw you on wwf…i was not a big fan until then. you are one beautiful women and a true sweetheart…tears fill my eyes as i write….will miss you…rest in peace…you are in a better place now.

Gary Schubert wrote: Elizabeth was in my opinion the greatest valet of all time. This is because she was traditional in the sense that her role was simply to cheer on her man. It was very rare to see her get involved in matches. This is much different today, as whenever there is a female at ringside you are almost always going to see the classic “low blow”. She was also able to showcase her beauty in a very classy and sophisticated way. Now we just have these so called “divas” who are just on TV for 30 seconds in a bikini. These women don’t know what pro wrestling is about. Elizabeth was able to play her characters really well, whether it was as a face in WWE or a heel in WCW. She is a true legend as far as women’s involvement in professional wrestling is concerned. Thanks for the memories Elizabeth, you will be missed.

Related Items
← Previous Story The infamous Jameson interview recap
Next Story → AS I SEE IT: NJPW and JAPW