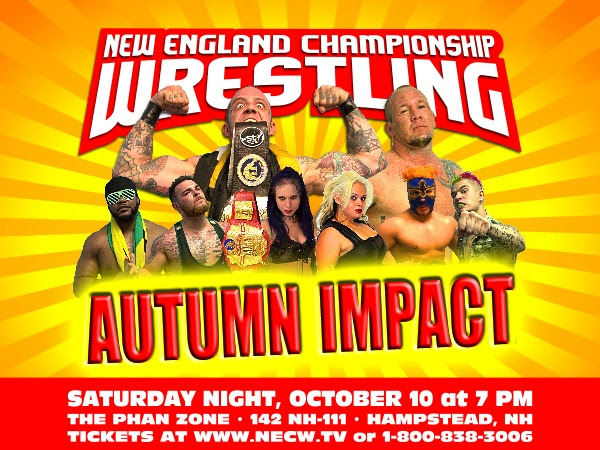 THIS SATURDAY NIGHT, NECW Comes to Nearby Hampstead, NH for AUTUMN IMPACT featuring “The Masshole’s” First Title Defense & Much More!

After one of the greatest NECW events ever, BASH 15, New England Championship Wrestling returns to live action this Saturday night, October 10, making its debut at The Phan Zone, 142 NH-111 in Hampstead, NH with AUTUMN IMPACT.  Bell time is 7 PM.

New NECW Television Champion, Todo Loco defends his newly regained crown against “The Mind Eraser” Mike Graca. For the first time, the champion may be facing some more loco than he is.

Two big women’s bouts are on tap!  First, the World Women’s Wrestling Championship will be on the line as Mistress Belmont defends against Nikki Valentine with Maximum Mecca in her corner. Then the controversial Maximum Mecca will see action against Canadian newcomer, Eve.

Tickets for AUTUMN IMPACT are $15 for adults and $10 for kids under 12.  Tickets can be purchased online by clicking the image above or the button below, or you can charge by phone by calling 1-800-838-3006