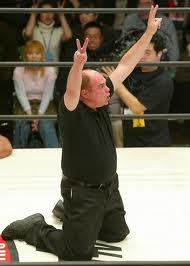 Fred Rubenstein (aka Fred Richards, Senior Official of the NWA) has credentials in the pro wrestling business that most people wish they had.  Starting as a beat writer covering pro wrestling show results LONG before there was an internet, Fred worked as a referee for many years, before becoming part of the group that has now taken over the National Wrestling Alliance, a once prestigious organization that has lost some of its luster, particularly over the past 10-12 years.

John House and Phil Varlese share this interview with Fred, not to talk about his accomplishments in wrestling, but to get to the issues that face the National Wrestling Alliance today, as they attempt to gain respect in the ranks of current Indy pro wrestling.  We asked many questions that were sent to us, not only by fans, but by critics as well.

On the heels of last week’s show, where The Wrestling  Guys discussed what they saw right & wrong with the NWA, as usual, they get right to the heart of the matter by bringing one of the top three men from the new Board of Governors.

Listen to the show here:

Question:  Do you follow the NWA?  Does the NWA have a bright future?