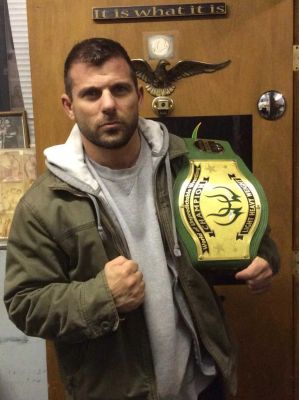 Matt Striker describes a key mistake he made during his WWE career, then immediately admonishes his “lack of a better sentence structure” at the end of said description.

Constructive self-criticism is ever present while speaking with Malverne resident Striker at Gleason’s Gym in Brooklyn. The boxing facility’s rings have been graced by the likes of Mike Tyson and “Sugar” Shane Mosley, but on this night the World of Unpredictable Wrestling and its collection of pro wrestling’s newbies and nomads have taken over.

An unvarnished 2×4 is visible holding up the gold lamé curtain that hides the combatants before they walk out to the crowd of 200. One grappler picks up a victory, then rushes to the DJ booth assembled in a nearby ring — still clad in trunks and boots — to keep the music going between matches.

For Striker, who wrestled in front of 80,000 people in Detroit at 2007’s WrestleMania XXIII, the more modest change of scenery isn’t a downer. As he hangs out backstage with guys being trained by WWE Hall of Famer “The Unpredictable” Johnny Rodz, it’s hard to not recall Single-A tenderfoots surrounding “Bull Durham” catcher Crash Davis as he marveled at his 21 days in “the show.”

In Striker’s case, it was a nearly 10-year stint in WWE as a wrestler and announcer. The ride ended last June when his contract wasn’t renewed, and the former high school teacher is hoping to impart some wisdom on the squared-circle’s next generation, largely by being honest about where he fell short.

Striker, 38, entered WWE with a brash, know-it-all “Matt Striker: Your Teacher” gimmick, a play off of his past career. When Striker’s duties were moved to ringside to call others’ matches, too much of his in-ring persona may have come with him.

“[I was] talking over people’s heads on certain situations,” Striker admits of his commentary. “And not realizing that the crux of the audience are the 8- to 11-year-old boys who want to see John Cena win and they have no care in the world that Daniel Bryan used to be called the American Dragon. Things like that came into my mind as a fan. I needed to learn to filter, so to speak. And I think the thing is, so many people base their legacy on the praise they get, and I think people should base their legacy on the constructive criticism that they can become better from.”

Striker’s last couple of years with the company were a hodgepodge of backstage interview duties and a return to in-ring action after previously serving as the voice of one of WWE’s marquee shows, “Friday Night SmackDown!”

“I think it’s a black and red thing,” Striker says in looking back at his departure. “I think it was WWE, they had a contract that they were paying someone that wasn’t doing a lot to earn their contract. And if I was the one writing the checks, I too would say we have to cut costs here… I would have swept floors for 100 bucks a week. I didn’t have to have a big contract. I really generally loved what I did.”

Sharing that love for the wrestling business why he’s happy to be back with his former trainer Rodz in Brooklyn, working with the likes of ECW alumnus Spanish Angel.

There’s gonna be a young kid at Gleason’s Gym that wants to be a wrestler,” Striker said.  “And maybe I can help him do that the ways guys like Tommy Dreamer and Spanish Angel and Devon Dudley helped me become a wrestler. I think it’s — ‘keeping the wheel going’ is what Johnny says, and I think that’s very important, just to try to help people.”

When not wrestling Striker said he has dabbled in acting and stunt work, as well as reinstating his teaching certification. He’d love to get another shot with WWE if the right opportunity came around, but until then he has the unique privilege of keeping his WWE moniker. The man born Matthew Kaye asked for and was granted the rights to “Matt Striker” in his initial WWE contract.