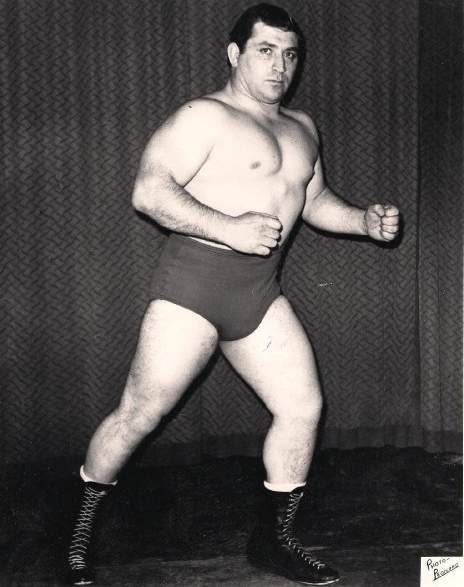 Calgary Herald obituary: Born on September 21, 1937 in Marigliano, Napoli, Italy. Beloved father of Joe (Mary), Tony (Carolena), two daughters, and stepdaughter Trich Duxbury. Passed away peacefully on January 24, 2010 at the age of 72, following a courageous battle with many health complications. Nicola will be forever missed by his sons; grandchildren: Antonio, Tamara, Isabella, Nicolas, and Alexia; brother Angelo Pacchiano (Sandra); sisters Maria Buonincontri (Tony) and Felicetta Giugliano (Filippo) of Italy; also by numerous cousins, nephews and nieces in Canada, Italy, Venezuela and New York. Nicola was predeceased by his mother Rosa Serpico, father Guiseppe Pacchiano and long-time companion Donna Kirk. Nicola emigrated from Italy in 1959 and made Canada his home. He contributed to building some of today’s Calgary skyline. Having a zest for life, a strong build and tremendous charisma, Nicola became part of Stampede wrestling, where he appeared in numerous matches on the popular weekend TV show. He loved catching up with friends at San Remo Social Club. The family is deeply appreciative of the exceptional care and support provided by the medical staff at the Foothills Medical Centre ICU Unit. A Funeral Mass will be held at Our Lady of Grace Italian and English Catholic Church, 1714 ? 14 Avenue N.E. on Thursday, January 28, 2010 at 7:00 p.m. After Mass everyone is welcome to join family and friends for coffee and refreshments at the church. In lieu of flowers, donations can be made directly to the Department of ICU Foothills Medical Centre, care of the “Calgary Health Trust”.. [reported by Vance Nevada]