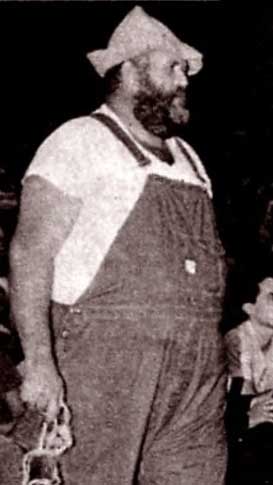 A hand-made fan’s sign left behind at a Phoenix show, picked up by one of the wrestlers as the ring was being torn down and passed about after the arena cleared out, provoked great laughter. The sign said, “Uncle Elmer is the Only Uncle Of Wrestling.” The sheer nonsense of the proclamation provoked much laughter among the ring crew and the wrestlers..

Robert Louis Howell wrote:
Stan Frazier appeared as Big Tex under his ‘Convict’ mask and was managed by The Assassins. The ‘Big Tex’ bit was a dig at the Professional’s protege Tex MacKenzie as the Super Pro (Protege) was a dig at the pro. The Assassins were careful not to infringe on trademarks as they had successfully sued Mario Galento over the name of his Super Assassins. (Later Super Assailants) — The Assassins allegedly traded Paul Demarco to Homer Odell in exchange for Big Tex and The Super Protege (Bogni).. Frazier and Bogni teamed for some matches without great success. Losing to The Professional and his Protege Tex Mackenzie. After The Assassins turned on Frazier, he and Bogni wrestled each other still under the masks..